The Toffees are considering relieving the Portuguese boss of his duties and bringing back their former manager following the heavy defeat to Liverpool. 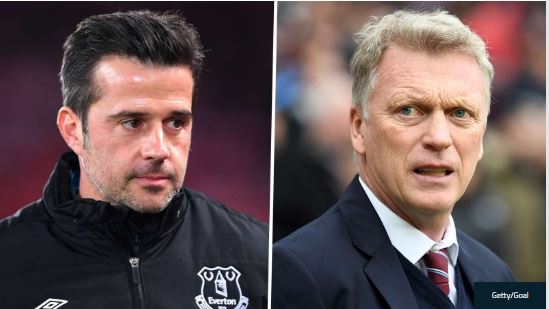 Everton are poised to sack Marco Silva following their Merseyside derby humiliation, with David Moyes primed for a surprise return to Goodison Park.

Silva’s time as Blues boss looks to be up following Wednesday night’s 5-2 drubbing at the hands of Premier League leaders Liverpool. With Southampton beating Norwich, Everton slipped into the bottom three as a result.

They have now lost nine of their last 13 league games and picked up just 14 points from 15 matches so far this season.

Silva again refused to comment on speculation surrounding his future, stating only that he “understood the questions” and that he would continue to be “100 per cent professional”.

But the Portuguese cut a forlorn figure as his team capitulated at Anfield, his five-man defence crumbling to such an extent that he was forced into a complete change of shape before half-time. Liverpool scored four times in the first half.

Marcel Brands, the director of football, was there to witness it, as was chief executive Denise Barrett-Baxendale and chief finance and commercial officer Sasha Ryazantsev. There was no sign at Anfield of Farhad Moshiri, the majority shareholder, or chairman Bill Kenwright, both of whom will have a big say in Silva’s future.

Sources have told Goal that Everton will hold a board meeting on Thursday, at which the manager’s position will be top of the agenda. It looks increasingly unlikely that Silva will be in charge for Saturday’s home game with Chelsea.

And it is understood that Kenwright’s preference would be for Moyes to be installed on a short-term basis.

The pair shared a close working relationship during Moyes’ 11-years at the club between 2002 and 2013, and it is understood that Moyes, out of work since leaving West Ham in the summer of 2018, would jump at the chance to return to Goodison.

The former Manchester United boss was at Preston vs West Brom on Monday night, and is understood to be expecting formal contact. Other names being considered include former Everton favourite Mikel Arteta, Monaco's Leonardo Jardim and Ajax boss Erik ten Hag, who would have the backing of Brands in particular.

National newspaper reports have already suggested that, should he be appointed, Moyes would bring in Tim Cahill, the Blues favourite, as part of his coaching staff, while sources have told Goal that the Scot would ask for an extension to any short-term contract, should he achieve a top-eight league finish this season.

Crucially, though, his appointment would not appear to have universal backing from Everton’s key stakeholders. Brands, for example, is aware that Moyes’ return would not go down well with supporters, while there is genuine sympathy for Silva’s situation, with an acceptance that Everton’s league position is not a true reflection of the work being put in by the manager and his staff.

But the league table isn’t lying. Only Norwich and Watford are below the Blues, who have lost to all three promoted clubs without scoring, and have now conceded 27 goals in 15 league games.

Eddie Howe, the Bournemouth manager, is another name that has been mentioned as a possible long-term appointment, while David Unsworth, the under-23s coach, would be available to step in on a short-term basis if required.

Everton’s December fixture list is a testing one, with games against Chelsea, Arsenal, Manchester United, Leicester, Burnley and Newcastle, before a trip to Manchester City and an FA Cup tie at Liverpool to bring in the New Year.

At this stage, it appears almost certain that Silva will not be around to see it.