Omoyele Sowore's wife has reacted to the man's release from DSS custody, revealing that she can't wait to have him home. 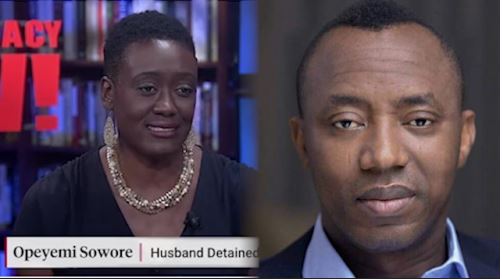 According to SaharaReporters, Opeyemi, wife of pro-democracy activist and Publisher of SaharaReporters, a pioneering online news platform – Omoyele Sowore – has said that she and their children cannot wait to have the 48-year-old back home.

Since August 3, 2019 when the outspoken social crusader was arrested in Lagos by the Department of State Services for calling on Nigerians to take to the streets in peaceful demonstrations to demand a better country from the administration of President Muhammadu Buhari, life had not been the same for the quick-smiling mother of two and all those around her.

From partaking in walks and events turning global attention to the illegal detention of Sowore in the facility of the DSS at the time to appearing at revered television programmes demanding justice on his matter, Opeyemi indeed went the mile in telling the world, who the man she was married to truly was.

But against widespread expectations, things took a different twist on Thursday.

Hours after Justice Ijeoma Ojukwu of the Federal High Court in Abuja ordered the DSS to release him within 24 hours after twice meeting his bail conditions, the secret police and their collaborators in high places budged – Sowore walked out of the dreaded facility a free, liberated man.

Though his trial in the case brought against him by the Nigerian Government commences on December 6 (Friday), his release on bail marks an entirely new journey in his bid for complete freedom.

Reacting to the development on Thursday, Opeyemi said that despite the delay in the release of her husband after two court orders to that effect, they look forward to his safe return home.

She said, “After 125 days of his illegal detention, my husband was released on bail for conditions he met weeks ago.

“While I am grateful for his long overdue release, I remain concerned for his safety and resolute on him being cleared on all charges.

“I look forward to his safe return home to our family in New Jersey.”

Described in some quarters as one of Nigeria’s genuine last remaining advocate of the masses, Sowore over the years has faced all sorts of hostile treatments from the government for choosing to stand by the people.

An advocate of equity and justice, those around him say he conquered fear and banished intimidation away from his domain long before now.

Celebrated globally for exposing Nigeria’s corrupt and ruthless politicians, Sowore will beginning from December 6, 2019 (Friday) defend himself in a case brought against him by the government.

He is being accused of insulting President Muhammadu Buhari and attempting to bring down his regime – charges experts and observers around the world have described as baseless and laughable.