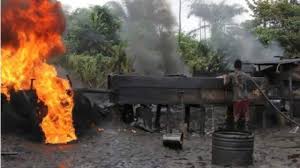 The two suspects, a 39-year old woman, who gave her name as Fejiro, disclosed that she is a civil servant working in a local government council and only visited her family house where the illegal refinery was cited occasionally.

Within the compound situated close to a river bank, owned by an octogenarian, Pa Amos Ofejiro, a big well used as a storage facility was dug very close to an uncompleted building where an unspecified large quantities of already refined diesel was stored.

A big tank with various access pipes attached to hoses that were clamped on pipelines laid along the right of ways from where crude oil theft was carried out before being refined and emptied into the nearby well from where the finished products are packaged in jerrycans and lyon bags for distributions.

Speaking to newsmen, the octogenarian landlord, Pa Ofejiro, said the illlegal refinery business in his backyard had been going on for decades, stating that his children resorted to the business as a means of keeping the family alive.

Briefing newsmen after the arrest, the leader of the joint operation, SP Salisu, disclosed that the assignment was carried out based on the directives of its General Commander, ACP Jubrin Kafani, in line with the zero tolerance of the Inspector General of Police Mohammed Adamu.

While scoring the operation as very successful, SP Salisu, stated that the two major areas where the exercise recorded success were in the arrest made and also established the fact that its intels were implacable across its operational base.

He said they used this sting operations which was the first of its kind in Delta area to also send a warning signal to those behind the criminal acts that they weree fully aware of their activities even in remote locations across the state.

SP Salisu, expressed optimism that subsequent operations in any part of the region would record more successes as they have now perfected their modus operandi in ensuring more arrests and recovery were made.

He, however,advised indigenes of the communities where the illegalities were being perpetrated not to indulge those carrying out the illicit oil business in their areas anymore due to the danger and health hazards they pose to their lives.

Meanwhile, the team experienced some difficulty in Ohoro community at Bomadi Junction when they stormed it went to arrest and impound stolen crude and locally-refined disel that had turned out to be amajor source of the livelihood for the indigenes.

Youths numbering over 200 attacked the team who displayed so much professionalism in ensuring  that there was no casualty by retreating from  the community.