There is serious discontent between national assembly aides and their principals over refusal to pay their full entitlements. 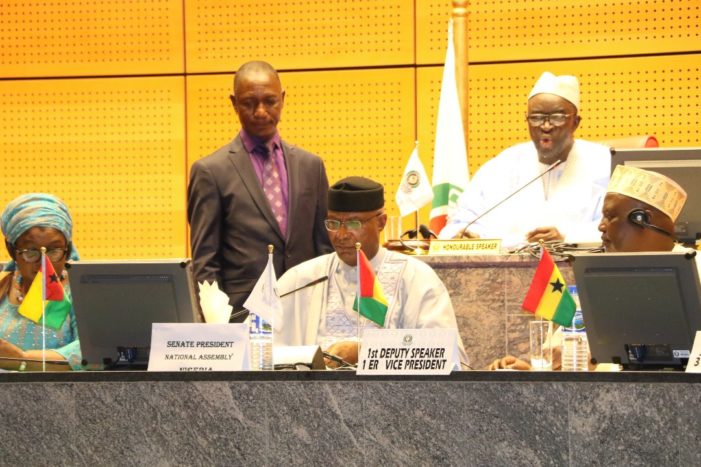 Ovie Omo-Agege
Aides to the Deputy President of the Senate, Ovie Omo-Agege; and the Deputy Speaker of the House of Representatives, Ahmed Wase, are groaning over the alleged refusal by the National Assembly to pay their full entitlements.
According to Punch, it was, however, learnt that those in the offices of the President of the Senate, Ahmad Lawan; and Speaker of the House of Representatives, Femi Gbajabiamila, were not affected.
The workers, who are aides to the presiding officers, alleged that though their appointments were made between June and July 2019, they have only been paid two months; October and November.
It was learnt on Friday that some of the aides had written their bosses to protest against the alleged instruction by the Clerk to the National Assembly, Mohammed Sani-Omolori, that further payments to the workers be stopped.
Some of the affected workers, who spoke to our correspondent on the condition of anonymity for fear of victimisation, accused the National Assembly bureaucracy of selectively paying those appointed by the lawmakers as aides.
An official in the office of the Deputy Speaker said, “It is not me alone but some of us. I am one of the earliest to be appointed by the Deputy Speaker. Since then, they have not paid us salaries. They will pick some, pay them and leave others till the next month.
Yesterday when I finally received my salary, I received only two months’ – October and November, instead of six months. When I asked why, they said the CNA had ordered that henceforth, they should pay from October. I know a few others in the Deputy Speaker’s office that are affected.
“We resumed in June, we got our letters (of appointment) on July 29. They later withdrew the letters. I was placed at Grade Level 16 Step 9. They later issued another letter and I was placed on the Consolidated Tertiary Institutions Salary Structure which is higher than the first one.
It was dated September 25, meanwhile the letter should have been dated July. Instead of them to start the payment from the day I resumed work, they paid me based on the second letter they issued.”
When asked if Wase was aware of the development, the aide said, “I wrote a letter to him.” He added, “Some have been paid fully – the select few – but when it got to our turn, they cut it; they said they would pay only two months.”
Another aide to the Deputy Speaker, who also complained about not being fully paid, said the payment should have started from the day he was employed.
When asked if the appointments were only announced or their employers communicated the appointments to the management for immediate actions, the aide said, “The appointments are not determined by the management, it is the principal who determines when you are appointed.”
Also, an aide to the Deputy Senate President said, “It is true; we are faced with the same situation. People are seriously agitated about it. I’m told that there will be a protest by next (this) week.”
Explaining the situation, the worker said, “In our own case here, some of us were employed on August 1; that was when the letter (of appointment) was dated. By September 10, another letter was issued. That second letter was a downward review of our salaries, without making reference to the first letter.

Some of us have received bank credit alerts, others have not. And those who have received so far were paid just two months and a fraction to cover the extra days. It is true and it affects both sides (Senate and House) and aides are not happy.
“Here is the irony of the issue: all senators have been paid from June 11 and all the aides that are on CONTISS have been paid as well. Even those who resumed in August and September and are on CONSTISS, have been paid; they are the ones who collect the highest amounts, from N800,000, N850,000 to N900,000.
Even some of them who also collected their letters same day with us in August, who are also on CONTISS; they backdated their appointment to June 28. But for others, they did not backdate. Instead, we started receiving payments of two months. Just a few persons who are not on CONTISS have collected five months.
“I spoke with someone in the accounts department who told me they had initially backdated the appointments to June 28 but soon after payments began, a directive came from the CNA that that they should halt the process. By the time payments began, people were surprised that it was for just two months.”
Several aides to Lawan and Gbajabiamila, however, denied that their letters were withdrawn or salaries not duly paid.
The management of the National Assembly, however, dismissed the allegations as mischievous.
The Director of Public Affairs, Office of the CNA, National Assembly, Mr Yahaya Dan-Zaria, stated that several appointees started working with their bosses without official appointment by the National Assembly Service Commission.
Dan-Zaria said, “Some of them started working with members (of the National Assembly) but they were never engaged. Nobody can just resume work without letter (of appointment). What the management is saying is that it is from the date on your letter that they will start paying you, not the date you decided to work with your boss.
“If at the inauguration you have been with them all through and you have been working with them, that is personal. After all, all aides are personal staff. The moment the NASC issues you a letter, that is the date of your agreement with the National Assembly, not when you started with the member; that is the truth.”
Top Stories