Semi Ajayi scored his third goal of the season in West Brom's 5-1 in over Swansea. 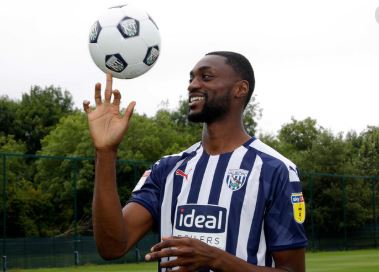 Semi Ajayi was on target as West Brom defeated Swansea City by 5-1 to return to the top of the Championship table.

Super Eagles defender Semi Ajayi opened the scoring after Kyle Bartley gave the Nigerian a headed assist to put the Baggies ahead. Matheus Pereira doubled the advantage after latching on to a brilliant cut-back from Kierian Gibbs to make it 2-0.

The Swans pulled one back in the 39th minute after Sam Surridge scrambled the ball into the back of the net from a corner-kick. But West Brom restored the two-goal advantage as Pereira put Hal Robson-Kanu through to score West Brom's third right on the stroke on half time. It was the turn of Matthew Philips to get his name on the scoresheet after heading home a perfect-inch cross from Pereira to make it 4-1 in the 70th minute.

And the onslaught was complete as Pereira provided his hat-trick of assists for Kyle Edwards who applied a superb finish as the match ended 5-1.

West Brom top Leeds United with two points with only one defeat all season after 20 matches and Slaven Bilic's side are likely to get automatic qualification into the Premier League.