It was learnt Oshiomhole's fate was linked with the desperation of the governors to install Buhari’s successor and determine those who would succeed them. 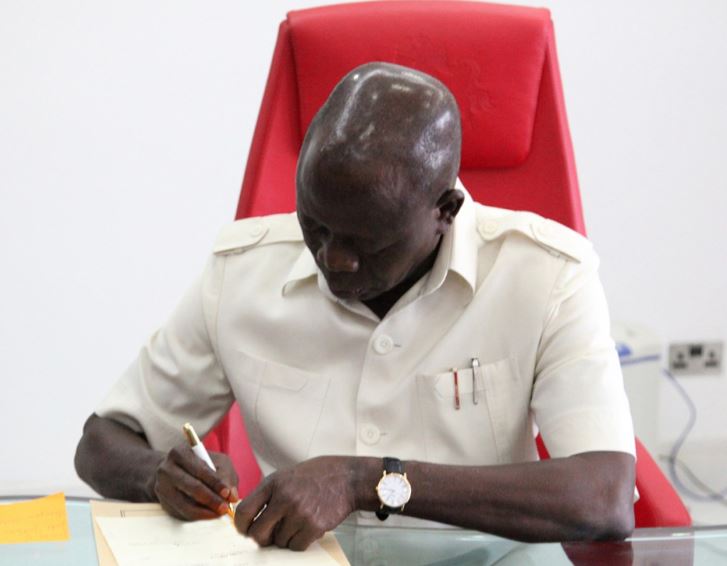 There are strong indications that some All Progressives Congress governors are plotting to seize the control of the party as part of efforts to install President Muhammadu Buhari’s successor in 2023 .

The PUNCH gathered on Monday that despite Buhari’ s meeting with the APC governors on Thursday and his discussions with the party ’s state chairmen on Friday , some governors were pressing ahead with the plot to remove the National Chairman of the party, Adams Oshiomhole.

It was learnt Oshiomhole's fate was linked with the desperation of the governors to install Buhari’s successor and determine those who would succeed them .

The Chairman of the Forum of the APC State Chairmen , who is the party ’s Chairman in Zamfara State, Ali Bukar , had at the meeting with the President on Friday appealed to Buhari to caution the governors.

He had said, ”Let me also express our recent worries regarding the activities of some of the governors who are undermining the efforts of the national chairman of our great party, Adams Oshiomhole , to reposition the party by plotting his removal .

“It is more worrisome knowing full well that they are not doing this because the national chairman is not performing his duties , according to the constitution , but they are fighting him due to their 2023 presidential ambitions when it is a notorious fact that Mr President had just commenced his second term in office a few months ago .”

A top member of the APC National Working Committee , who confided in The PUNCH on Monday , said that most of the party ’s ambitious governors were behind moves to remove Oshiomhole .

The source, who spoke on condition of anonymity for fear of retribution, said, “Everything that is happening is all about 2023 .
We know that these things are being propelled by the desire of governors to secure their political future post - Buhari, don’ t forget we are the ruling party and we are doing everything lawful to ensure it remains so beyond 2023 .

“Outgoing governors want to pick those who will succeed them . They also want President Muhammadu Buhari’s successor to come from within their ranks and they hold the opinion that for this to happen , they need to control the party at all levels.

“Whether you like it or not , any group , which controls the party at whatever level , has leverage over others . They know Oshiomhole is strong- willed so they want someone who they have a hold on to fit into their plans. That is all that is happening nothing more .”

Efforts to get a response from the Progressives Governors ’ Forum were futile . When contacted, the Press Secretary to the Kebbi State Governor , Abubakar Mua ’zu , said, “His excellency ( Atiku Bagudu, Chairman , PGF ) is out of the state on an official assignment . I believe the PGF has a person who speaks for them , contact him .”

Calls to the mobile telephone of the Director-General of the PGF, Salihu Lukeman, were neither picked nor returned. A response to a text message sent to him on the subject was still being awaited as of 8:03 pm .