Busted! See The Kidnappers Who Were Nabbed After Collecting N9m Ransom In Gombe (Photo)


Some kidnappers have been nabbed after they had allegedly collected the sum of N9 million as ransom in Gombe. 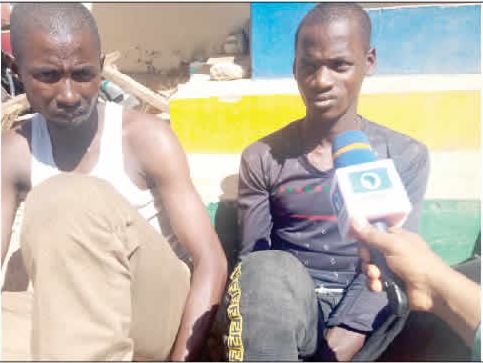 According to a report by Punch Metro, a 20-year-old man, Yusuf Umar, from the Kwami Local Government Area of Gombe State, and his 28-year-old accomplice, Nasiru Hassam, of the Barunde Quarter, Gombe, have been arrested by the police for criminal conspiracy, armed robbery and kidnapping.

The Police Public Relations Officer in the state, SP Mary Malum, said this while parading the suspects before journalists.

According to her, the suspects were arrested after the police received and acted on credible intelligence.

She said, “The suspects criminally conspired and robbed one Alhaji Abubakar Mohammed, 72, of the Yelwa Quarter, Dadinkowa, of the sum of N200,000, kidnapped and kept him in the Dukul hills in the Kwami Local Government Area of the state and collected a ransom of N9m before releasing him after 19 days.

“Subsequently, suspects were arrested in the Keandon Liji area of the Yamaltu Deba Local Government Area. The suspects confessed to the crime and will soon be charged. Exhibits recovered from them included two mobile telephones.”

Their accomplices, Lawan Boda, Babangida, Iro and Niga, are however still at large and have been declared wanted by the police in connection with the case.

The PPRO said, “The suspects kidnapped one 53-year-old Pastor Husseini Umar, took him to an unknown destination after stealing some valuables from him, which amounted to N60,000; thereafter, they collected N6m as ransom from his family before he was released.

“The modus operandi of the hoodlums is using a member of the syndicate to trail and identify the house of their victims before they strike late in the night.”

She said the command was determined to rid the state of criminal elements.

Towards this end, Malum appealed to members of the public to assist the police with credible information about criminals and their hideouts to enable the command to act accordingly.