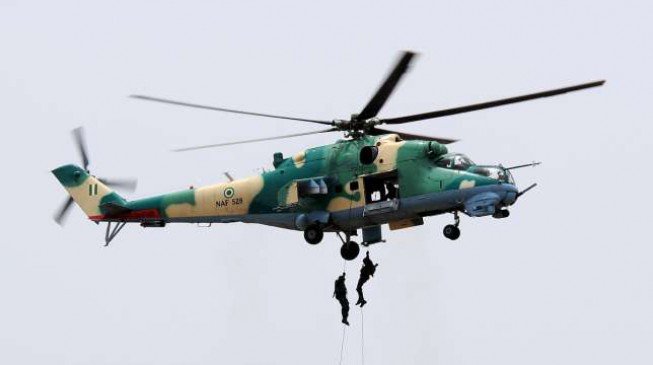 According to a report by Punch Metro, the Nigerian Air Force, through the Air Task Force of Operation LAFIYA DOLE, has launched “Operation Rattle Snake” against terrorists’ elements in the North East.

Air Commodore Ibikunle Daramola, NAF Director of Public Relations and Information announced this in a statement on Wednesday in Abuja.

Daramola said the Air Interdiction Operation, which commenced on Tuesday would target selected locations within the North East to further degrade remnants of the terrorists as well as deny them safe havens and freedom of action.

“On Day One of the Operations, airstrikes by NAF aircraft resulted in the neutralisation of several Boko Haram Terrorists and destruction of some of their structures at their tactical headquarters in Parisu as well as another settlement, Garin Maloma, both on the fringes of the Sambisa Forest in Borno State,” he said.

Daramola explained that the attacks were executed following series of Intelligence, Surveillance and Reconnaissance missions, that showed the presence of a significant number of BHT fighters in makeshift structures/buildings under trees spread across the two settlements.

” Overhead Parisu, no fewer than 30 terrorists were observed by the ISR aircraft in different parts of the settlement.

” The attack aircraft dispatched by the ATF to engage the location recorded accurate hits within the target area, leading to the destruction of some of the structures as well as the killing of several terrorists.

” Other fighters, who attempted to flee while putting up a fight, were taken out by follow on strikes at their hiding places under some trees as well as along the river line at the edge of the settlement.

” An attack conducted earlier in the day at Garin Maloma similarly resulted in the neutralisation of several BHTs,” he said.

Daramola said that NAF, operating in concert with surface forces, would sustain its efforts to completely destroy all remnants of the terrorists in the North East.