Trouble was averted in Sapele after some Muslims blocked the road while observing Jumat prayer. 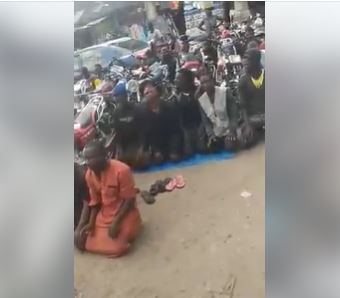 Muslims block road while praying
Some residents of Sapele in Delta state have expressed their anger after some Muslims blocked a major road while praying.
The incident caused traffic, limiting movement in the area.
According to journalist, Sapele Oghenek, the Muslims blocked the road while observing Jumat prayer at about 2 pm in the afternoon.
In the video, market people could be heard complaining about the restriction of movement they caused. They can be seen kneeling in the middle of the road observing their prayers while bikes are parked on the other side of the road.
Cars and other road users had to park and wait for them to finish praying before they could continue moving.
The act has been condemned by many people who said the praying Muslims should have looked for a better place to pray instead of blocking the road used by other Nigerians.
Watch the video below:
Top Stories