Two men have been docked and sentenced to six months imprisonment by the EFCC for impersonation and fraud. 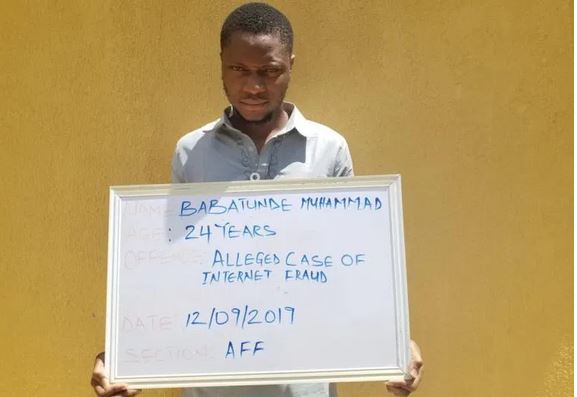 The convicts, who were prosecuted on a two count charge, were convicted and sentenced to six months imprisonment.

The charge against Babatunde reads, ” That you,  Babatunde Mohammed Bashir on or about the 20th day of September,  2019 in Ilorin, within the jurisdiction of the High Court of Kwara State,  did attempt to cheat by personation, when you represented yourself as a Detective and requested one Mr Elian Torres Saucedo to send $500 gift card to you , a representation you knew to be false and thereby committed an offence contrary contrary to Section 95 of the Penal Code and punishable under Section 324 of the same law ”

The charge against Paul reads, ” That you,  Paul Chibueze Meshack ( Alias Robert Hicks) sometime in June  2019, at Ilorin within the judicial division of the Kwara State High Court,  did attempt to cheat by personation,  when you pretended to be one Robert Hicks of the HR Department of Amerigroup Corporation with gmail account: [email protected] and in that guise communication with one Jessica Winter of Wiltshire England vide gmail hangout with jess winter , a representation you knew to be false and thereby committed an offence contrary to Section 95 of the Penal Code and punishable under Section 324 of the same law ”

The defendants pleaded guilty to the charge brought against them.

In convicting the defendants, Justice Oyinloye said the evidence of the prosecution witness,  Olamide Sadiq,  an operative of the EFCC was not challenged nor controverted by the defendants.

According to the Judge “Paul’s sentence is to commence from 21st of October, 2019 while Babatunde’s sentence would commence on 5th of September 2019, the day of their arrest.”