The Ekiti state government has named and shamed a convicted s*x offender who defiled a 14-year-old. 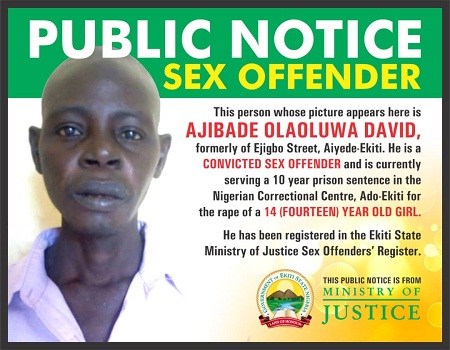 The Ekiti state government has recorded another name, Ajibade David, a resident of the state, in its s*x offenders’ register.

David was said to have been convicted of raping a 14-year-old girl and currently serving a 10-year jail term in prison.

“This person whose picture appears here is AJIBADE OLAOLUWA DAVID, formerly of Ejigbo Street, Aiyede-Ekiti,” a notice by the state read.

“He is a CONVICTED SEX OFFENDER and is currently serving a 10 year prison sentence in the Nigerian Correctional Centre, Ado-Ekiti for the rape of a 14 (FOURTEEN) YEAR OLD GIRL.

“He has been registered in the Ekiti State Ministry of Justice Sex Offenders’ Register.”

In August, Kayode Fayemi, Ekiti state governor, announced that the state will be naming and shaming those convicted of rape in the state.

The government opened the register with one Asateru Gabriel, a cleric in the state.

He was said to have been convicted of sexually abusing a seven-year-old girl.

The cleric is already serving a five-year jail term in Ado-Ekiti prison.

Many Nigerians have commended the state government for the development.