A woman has told the story of how her boyfriend was exposed as a cheat by a Christmas photo he took. 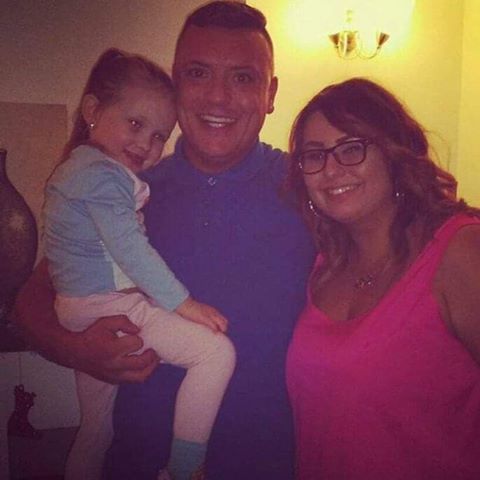 Jonathan Wannell with then-girlfriend Deena Hayward and her daughter Shantayah, then three, on Christmas Eve

Jonathan Wannell appeared to be the perfect boyfriend and a doting dad figure.

But then girlfriend Deena Hayward, from Newport, Wales, was sent a picture of him playing happy families with another woman on Christmas Day.

The 27-year-old was horrified and confronted her cheating boyfriend, but in doing so she unlocked a buried violent side.

Jonathan, 34, unleashed a trail of violence on mum-of-one Deena, strangling her, beating her and even running her over in his car.

As we opened our Christmas Eve boxes, my three-year-old daughter Shantayah was buzzing with excitement.

We were at my mum Claire’s house for Christmas, and my boyfriend Jonathan Wannell had come too. We had only been together for a few months, but it had been a whirlwind romance.

We’d known each other since we were 15, so it felt right. It wasn’t long before he moved in with me, and Shantayah was already calling him Daddy.

Jonathan was spending Christmas Day with his parents, so I gave him his presents on Christmas Eve.

We had a wonderful time, opening them all up with Shantayah and helping her lay out a glass of milk and a mince pie for Father Christmas, and a carrot for Rudolph.

As my mum took a sweet family snap of the three of us, I'd never felt happier.

When my over-excited three-year-old was tucked up in bed, Jonathan and I carefully laid out reindeer dust to make everything was extra magical.

I put the finishing touches to Shantayah’s stocking as Jonathan hauled the bike and Minnie Mouse rocking chair he’d bought under the tree.

The next morning, Shantayah was up at the crack of dawn.

Later in the morning, Jonathan called. "Merry Christmas babe," he said. "I’m having dinner at Mum’s, then going for a drink with my brother."

"That sounds nice," I said. "Shantayah’s thrilled with the gifts you got her."

We chatted for a while, then I went back to celebrating with my family. That evening, I posted the family picture on Facebook.

On Boxing Day, I spoke to Jonathan again. He said he had plans to go out for a drink with his brother and sister, while I went back to Mum’s to see my extended family.

But later that day, I got a Facebook message from someone called Megan*. "Are you in a relationship with Jonathan?"

Confused, I typed back "Yes". Seconds later, she sent a reply that made my blood run cold. "Well, so am I."

It turned out Jonathan hadn’t been at his parent’s for Christmas after all. He’d been with his other woman.

I desperately hoped it was some kind of horrible prank, but then Megan sent me a picture of Jonathan sat at the table for his Christmas dinner.

I felt sick. I thought Jonathan and I were happy together. I couldn’t believe he’d been seeing someone else behind my back. I was heartbroken.When he came home later that afternoon, I confronted him.

"What’s this then?" I demanded, thrusting the phone with the messages from Megan under his nose.

The colour drained from his face. "She’s just an ex, she’s crazy," he insisted. "Nothing is going on."

"Why’s she got a photo of you at her house on Christmas Day then?" I said.

Jonathan started to make excuses about her being friends with his sister, but I didn’t want to hear it. I threw him out.
But on New Year’s Eve, when I went to the pub with my mates, he was there.

"Please give me another chance Deena," he begged. "I’m not interested in Megan, it’s you I want."

I felt myself wavering. I did still love Jonathan, and I wanted to give him the benefit of the doubt.

We saw in the New Year together, and I hoped it would be a fresh start for us.

For a while, things were good. But a few months later, Jonathan came home with a new car while his was in the garage.

Shantayah was playing with the keys, and when I took them off her I noticed one of the key rings had a photo on it. My stomach dropped.

I recognised the smiling face immediately. It was Megan.

"What’s going on?" I stormed, chucking the keys at him. It turned out he had borrowed Megan's car.

I was furious he was still in touch with her. I expected him to apologise and come up with an excuse.

But instead he saw red, and slamming my head into a wall.

I’d always known Jonathan was a bit of a bad boy. He’d even been in prison before we got together, for stabbing two men.

But I’d never seen a violent side to him, and thought that was all in his past. I certainly never expected him to turn on me.
Jonathan stormed out of the house. Later that evening, after I’d dropped Shantayah off at Mum’s, he came back.

I thought he’d want to apologise. But I got a text from someone he didn't like and Jonathan snapped again.

"Now you can’t call anyone for help," he taunted. "Do you feel vulnerable now?"

"Why would you do this?" I asked. By way of an answer, he spat in my face.

Then he suddenly snapped back, and went to bed like everything was normal.
From then on, I was walking on eggshells. Jonathan could snap at the smallest thing, and he started wearing me down.

"You’re not good enough for anyone else but me," he’d sneer. "You’re fat and ugly and covered in stretch marks, no one else would have you."

I started to believe he was right.

One time, we got into an argument at a friend's house and I drove off, but he followed me in his car.

When I got out of my car to confront him, I saw an evil glint in his eye - before he drove straight at me and ran me over.

I reported him to the police, but he persuaded me to drop the charges and give him another chance.

I was so scared of him, I felt I had no choice but to do what he wanted.

Jonathan was always sorry, always insistent it would never happen again. But of course it always did.
I even sent my daughter to live with Mum, I was so scared she'd get caught in the middle of one of Jonathan's violent outbursts.

One evening in January 2017, we shared a bottle of wine and a sleeping tablet to help us doze off.

I slept late, when I woke Jonathan was gone and I had eight missed calls. I panicked.

When he came home, he kicked off again. "You're a slag," he spat. "You've been sleeping with men all day, haven't you?"

I tried to ignore him, but when I went to make a coffee he followed me into the kitchen.
"Why do you keep doing this?" he asked, wrapping his hands around my throat. I coughed and spluttered, I didn't have the energy to fight back.

Suddenly he let go, punching a hole in the door before running off.

Later that evening, Jonathan called and asked me to pick him up. We got into an argument and he smashed my head against the car window.

He ran off but was waiting for me when I got home. There, he continued to attack me, smacking my arm with a mop handle so hard I thought it had broken.

Terrified, I fled to a friend's house and went to the hospital the next day, to get my arm treated.

I hoped that was the end of it, but the next day Jonathan lost it again. As we fought in the kitchen, I knocked over a knife block. He grabbed a knife and started slashing at my legs.

I managed to flee and drove to my friend's house. "I need help," I begged, as she stared at me in shock.

"It's time to call the police," she said.
Cops came to take a statement and Jonathan was arrested that evening.

In June 2017, he pleaded guilty to assault by beating and common assault at Newport Crown Court.

He was given an eight-month sentence and a seven-year restraining order.

But because he’d been on remand awaiting the sentencing, they let him free that day. I couldn't believe this is supposed to be justice.

The restraining order was a joke to him, he came to my house on the day he was sentenced.

Luckily I wasn’t in, but when the builder I had round described the man, I knew it was Jonathan.

Now I keep a diary of everything he does. At one stage, I was so terrified of him I even planned my own funeral, leaving instructions for a friend in case he killed me.

But I try not to let him get to me now. I have CCTV and alarms all over my house, so if he does try anything I'll know.

Christmas should be a time of peace and goodwill, but when that festive photo revealed Jonathan’s affair it sparked a campaign of brutal violence.

*Megan’s name has been changed.