The Bundesliga's top goalscorer is expected to be back in action after the German winter break, meaning he shouldn't miss any action. 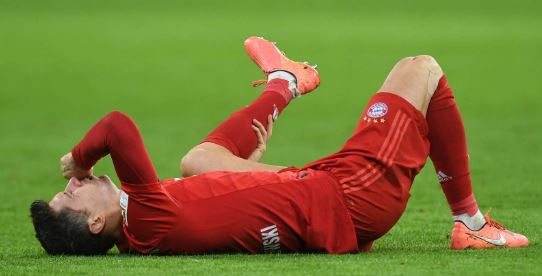 Robert Lewandowski will have groin surgery straight after Bayern Munich face Wolfsburg in the Bundesliga on Saturday.

The striker will be available to play at the Allianz Arena in the champions' final match of the first half of the league season, ahead of the winter break.

Interim head coach Hansi Flick says Lewandowski will then have an operation with a view to being fully recovered when they play Hertha Berlin on January 19.
"Robert will undergo groin surgery straight after Saturday's game," Flick told reporters on Friday. "We don't want to waste any time. We'll have to see how the recovery process goes.

"In the situation we're in, we're glad to have him available. The downtime should be 10 to 14 days."

Lewandowski has already scored 30 goals in a remarkable first half of the season, with 19 of those coming in the opening 16 matches of the Bundesliga.

Flick is relieved to have the Poland international to call on given Bayern are likely only to have 11 senior players fit for Wolfsburg's visit.

With long-term absentee Nikas Sule not likely to return until April and both Lucas Hernandez and Kingsley Coman sidelined, the loss of Thiago Alcantara to suspension for this weekend is a blow to Bayern's thin squad.

Flick does at least hope to have David Alaba available, despite the defender having been hurt in the win at Freiburg.

"We have 11 healthy first-team players, plus five youngsters," he said.

"David got a knock on the ankle in Freiburg. He was training individually today [Friday], but he should be on board for tomorrow."

Lewandowski's 19 league goals so far has him just about keeping the pace needed to match Gerd Muller's all-time record of 40 goals in a Bundesliga season set in 1971-72.
Bayern go into the Wolfsburg game in third place in the table, four points behind the top two of RB Leipzig and Borussia Monchengladbach.

Flick will be hoping his youngsters can rise to the challenge again if needed, after 18-year-old debutant Joshua Zirkzee came off the bench to score the winning goal at Freiburg on Wednesday.

Bayern had looked set to drop more points in their faltering Bundesliga title defence, but the teenager won the game in stoppage time with his first touch of the ball.