A police officer has been exposed for allegedly beating the hell out of his wife in Kaduna. 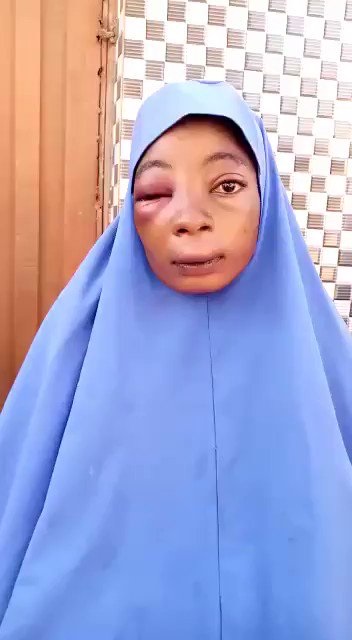 Beaten wife
A police officer identified as Sgt Yusuf Bello has reportedly beaten his wife and left her with a black eye after they had an argument over N500.
The incident happened in Kaduna state.
The sad story was shared by the Commissioner for Human Services and Social Development in Kaduna State, Hafsat Bala who decried the incident.
According to her, she will ensure that the officer is brought to book.
Her tweet reads:
"I am getting very disturbed by the spate of violence meted against women by their “supposed” husband’s. This case is of one Sgt. Yusuf Bello of
@PoliceNG who beat his wife mercilessly over ₦500. Where does the love and respect go when they assume this beastly mode?
I have also noticed that the trend is getting especially more rampant with security operatives who are increasingly feeling above the law. I call on the heads of @PoliceNG, @HQNigerianArmy @NigAirForce @NigerianNavy, CustomsNG and other security agencies to step in.
We have reported the case of this violent policeman to the Ministry of Internal Security & Home Affairs led by @samuelaruwan, who we’re sure will expedite action. However, we need to begin a serious conversation with ourselves, why is there a seeming increase in marital violence?"
Top Stories