Sowore Gets Nominated For United States Prisoner Of Conscience Honour


Nigerian activist and ex presidential candidate, Sowore has been nominated for a United States Prisoner of Conscience honour. 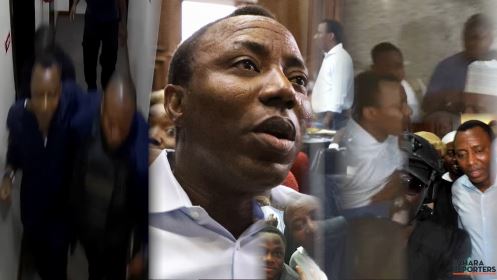 According to SaharaReporters, the pro-democracy campaigner and journalist, Omoyele Sowore, has been nominated to receive the Prisoner of Conscience honour from the Tom Lantos Human Rights Commission of the United States House of Representatives.

The bipartisan commission is charged with promoting, defending and advocating for international human rights.

The Congressman made the announcement during a meeting with other American politicians on Friday.

He said, “For months now, I have been working closely with the Sowore family, the Haworth community, the State Department, and my colleagues to advocate on Yele’s (Omoyele) behalf.

“We are urging the Nigerian Government to protect Yele’s safety, provide him with the due process he deserves, and ultimately permit him to return home as soon as possible.

“We will continue watching the situation in Nigeria, a democracy seeking closer ties with the United States, to make sure the government respects basic human rights.”

Gottheimer and other members of Congress had earlier sent a letter to Nigeria’s Attorney-General of the Federation and Minister of Justice, Abubakar Malami (SAN), requesting that immediate steps be taken to ensure the safety and security of Sowore while still in custody and to ensure he get a credible trial.

Few days after receiving that latter, Malami on Tuesday ordered the release of Sowore from unlawful detention by the Department of State Services.

The journalist was first arrested on August 3, 2019 for calling on Nigerians to take to the streets in peaceful demonstrations to demand a better country from political leaders.

He was briefly released on bail on December 5 but rearrested a few hours later on December 6 by DSS operatives while appearing for his trial in a case brought against him by the Nigerian Government.

He is being accused of insulting President Muhammadu Buhari and planning to bring down his regime.

In all, Sowore spent over four months in detention despite two court orders directing his release on bail during that period.