'Must I Marry A BBNaija Housemate?' - Nina Reacts To Khafi And Gedoni's Engagement


BBNaija star, Nina Ivy has reacted to the Khafi and Gedoni's engagement as she replies fans who dragged her into the matter. 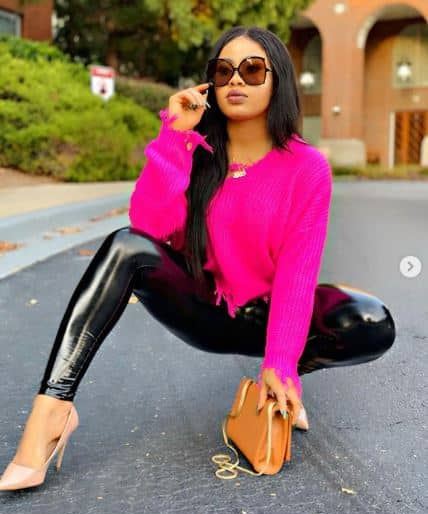 Nina Chinonso Onyenobi, a former housemate of the Big Brother Naija (BBNaija) 2018 edition, has aimed a dig at some fans who keep dragging her into the recent engagement of Khafi Kareem and Gedoni Ekpata.

We had earlier reported how Gedoni proposed to Khafi, who both featured in the 2019 edition of the reality TV show, on Christmas day, while they were both away on a vacation in Cape Verde.

The development has left many talking with some fans calling out the beauty queen.

Apparently cheesed off, Nina took to her Insta story to react to the engagement of the two reality TV stars.

“I don’t get why my name is being mentioned in this whole BBN marriage thing. Must I marry a big brother housemate? I bet you all ain’t ready for me though lol,” she wrote on Thursday. 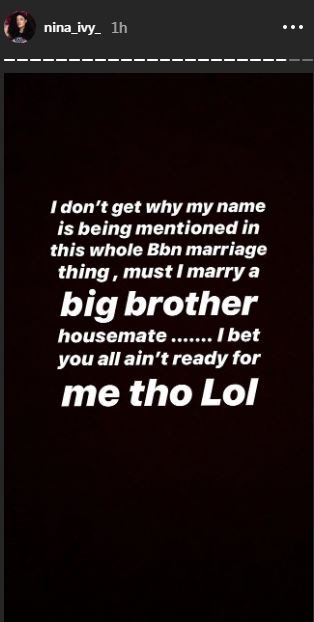 Her comment however, seemed to be a thinly-veiled dig at some fans who kept dragging her into the picture of the two love birds.

Nina and Miracle, the eventual winner of the 2018 edition of the show, were speculated to be in a relationship while the show lasted, but nothing came out of it in the end.