I Did Not Impregnate The President's Daughter - Nigeria Footballer Laments


In an exclusive interview on Brila FM’s football Live show, the midfielder narrated what has become his travail. 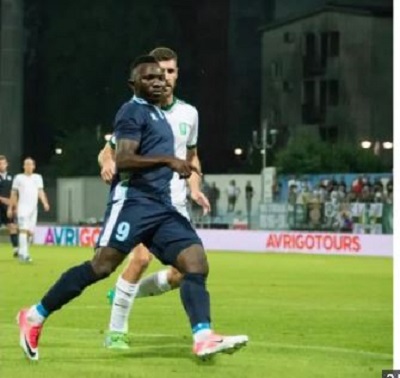 Donatus Edafe is not a household name, but the footballer was in the news recently, not for his exploits on the pitch, rather for allegedly scoring points with his club President’s daughter off the pitch.

Edafe, 26, moved from Nigeria to Slovenia chasing his dream of a great football career and while there in the hope to kick start what could possibly become the next big story, he made headlines for causing a small scandal, that ended up being a hoax.

There had been reports of a footballer’s love affair gone awry, and it had to do with an unnamed Nigerian in the lower divisions in Slovenia, who knocked up a lady and got the sack by his club side for misconduct.

Days later a few publications put a name to the faceless footballer and a club name to the organization involved.

However, it turns out it was all calumny and a scandal Edafe is hoping to wish away – even through legal means.

In an exclusive interview on Brila FM’s football Live show, the midfielder narrated what has become his travail.

“When I got there (ND Gorica), I wasn’t getting playing time and my Agent told the club I wanted to leave. I did and went to India.

“Only four foreigners were named on matchday day, but one had to sit on the bench. The club president asked that we be patient, but my Agent declined and we pulled the plug.

“So there was no wrong doing on my part or the club and we have a good relationship; even before I went to India, I visited the club.

“The president doesn’t have a daughter. When I saw the news last week I was shocked and I called my friend Amarachi Osuji, who was in Slovenia and he was unaware.

“The next day when I came back from training I saw my name attached to the story, I was so so mad. The reports attempted to tarnish my name and I will take this matter to the Court,” said Edafe.