The immediate past governor of Ekiti state has replied his critics who attacked him for dancing with a white woman. 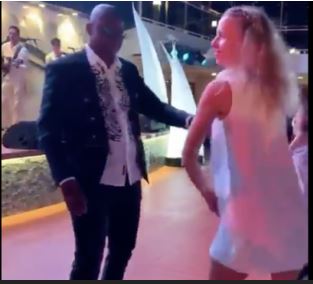 Fayose dancing with the woman

Former governor of Ekiti State, Ayo Fayose, has told those criticising him for dancing with a woman in the Caribbean that they can a ‘hug transformer’.

Fayose in a post on Twitter, used the phrase, which is a metaphor for ‘kill yourself’ in Nigeria, to fire back at his critics.

Photographs and a video showing the former Ekiti governor having a great time abroad had continued to make the rounds on the Internet.

Critics, who believe that Fayose merely feigned ill health to escape out of the country for other reasons, have continued to condemn his conduct.

But firing back his own missile, Fayose said, “Once again, Happy New Year to everyone, particularly my haters politically or otherwise.

“How far can you go in your machinations? Definitely nowhere. Remember; ‘He that is blessed of God cannot be cursed’.

“I will remain your headache in 2020 if you don’t repent.

“These ‘hailers’, when I was on their case, they were crying. Now I’m on my own lane enjoying my life, they are still crying and sucking.

“Expect more so you can cry more. I’m on medical check-up, not admission. Celebrating New Year is my right, haters can hug transformer.”

Fayose is being prosecuted by the Economic and Financial Crimes Commission for alleged misappropriation of funds during his time as governor.

He was granted permission by the Federal High Court in Lagos to travel out for medical attention.

The former governor has taken some time out in the process to ‘enjoy’ himself, drawing the ire of critics.