Locals said that the attackers invaded the community and began shooting sporadically and setting ablaze residential houses and places of worship. 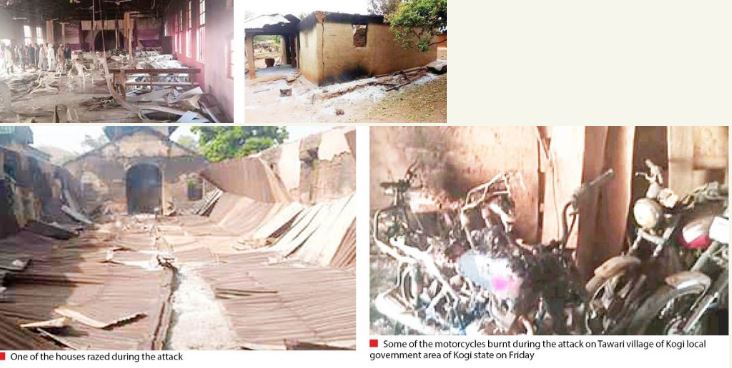 Pictures from the scene of the attack

An early morning attack on Tawari community in Kogi Local Government Area of Kogi State yesterday left about 23 persons dead. The attack was said to have been launched about 1am on Friday by gunmen suspected to be herdsmen numbering over 100.

Locals said that the attackers invaded the community and began shooting sporadically and setting ablaze residential houses and places of worship.

It was also confirmed that the ward chairman of the All Progressives Congress (APC) in Tawari ward, Ibrahim Simbabi, and the Chief Imam of the village, Mallam Zakari Salihu, were amongt those killed in the attack. The attackers also razed down the oldest clinic in the area which was built by missionaries during colonial rule and burnt the official vehicle of the traditional ruler of the area, the Aguma of Tawari, Alhaji Idris Tawari, among other property.

The administrator of the local government, Musa Tanko Mohammed, however confirmed that 19 persons died in the early morning invasion. But locals said they counted 23 corpses, claiming that 20 of them were of Bassa Kwomu ethnic group while three were Gbayi, adding that many others were injured, including policemen who are said to be receiving treatment at the Federal Medical Centre Lokoja and the Koton Karfe General Hospital. He described the incident as “wicked and heartless”, assuring that efforts were on to restore normalcy to the area.

Tanko promised the residents that the council would work with relevant security agencies to ensure that the perpetrators were arrested and prosecuted. He directed the immediate evacuation of survivors to a general hospital for proper medical care, pledging that the council would settle the medical bill. Locals suspect the attack to be a reprisal over the killing last week of some kidnappers suspected to be herdsmen around the area.

The suspected kidnappers were killed along the Lokoja-Abuja highway by security agencies, following a tip off by vigilantes from Tawari community, a development that was believed to have angered the invaders to attack the community. Residents said the attackers went street by street torching houses and killing people. According to Mrs Comfort Solomon, who survived the attack, the gunmen came in their numbers on motorcycles and began killing and burning buildings until the early hours of Friday.

Comfort said many places of worship as well as the palace of the Aguma of Tawari were burnt down by the invaders. “The gunmen were up to 100 in number. They came into the community with motorcycles around 11:15 p.m. when villagers were sleeping. “They entered selected houses, packed foodstuff and motorcycles and burnt selected houses, including homes of clerics.

“They killed more than 15 men. The attackers were communicating with one another in Hausa language,” Solomon told a correspondent of the News Agency of Nigeria (NAN).

Another indigene of the community, Mrs Rita Nuhu, who spoke on the attack, said her father’s house was completely razed during the attack.

“My people have been calling me from home that my father’s house was burnt down by the attackers. “My mother and her sister were ordered out of the house after which the house was set ablaze while about 15 men were killed.” According to her, the information she got from her village was that the death toll would rise. ”We are calling on security agencies to bring the perpetrators to justice.

We appeal to the federal and state governments to come to our aid,” she pleaded. The community head of Tawari, Chief Idris Yusuf, who also spoke on the incident, said it was the first time the community was witnessing such attack. Kogi State Governor Yahaya Bello has directed security agencies to fish out those behind the attack. In a statement by the governor’s Chief Press Secretary, Mr Onogwu Muhammed, Bello urged the security to “swing into action and ensure those who carried out the dastardly act faced the law”.

The governor condemned the incident and warned that anyone who wants to cause crisis in the state would have himself to blame, assuring that his administration would do everything to protect the lives and property of the people of the state. Governor Bello urged the people to be calm and law abiding while assuring them of the determination of his administration to flush out bandits and criminals out of the state.

Kogi State Commissioner of Police, Ede Ayuba Ekpeji who confirmed the attack said detachments of policemen men had been deployed to the community to restore normalcy. The CP in a statement issued by the command’s spokesman, William Aya, condemned the attack and called for calm. He said special forces, Federal Anti-Robbery Squad, Counter Terrorism Unit, Police Mobile Force, as well as the conventional policemen were all on ground in the area to forestall any breakdown of law and order.

“He has ordered the deputy Commissioner of Police in charge of investigation to commence investigation so as to unravel the cause of the attack,” the statement said. The CP appealed to the law abiding people of the state to volunteer useful, timely and credible information to the police and any other security agency on the activities of criminal elements in the state.