The government of Kwara state have stated why it demolished the old peoples home built by Late Dr Saraki. 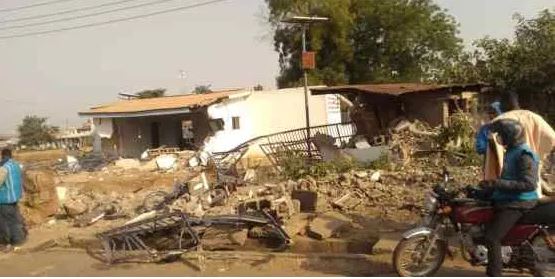 The Committee on the Review of sales of Kwara Government property from 1999 to date has declared that there is no proof of payment or Right of Occupancy on the expanse of land where late Dr Olusola Saraki built his Ile Arugbo (old peoples home) in Ilorin.

Sen. Makanjuola Ajadi, the Chairman of the committee, disclosed this in Ilorin while briefing newsmen on the controversy surrounding government’s reclamation of the Ile Arugbo land.

The News Agency of Nigeria (NAN) reports that the building on the land opposite late Dr Olusola Saraki’s house in Ilorin was reclaimed by the government while the building on it, known as “Ile arugbo” (Old peoples home) was demolished.

“The attention of the Committee on the Review of Sales of Kwara State Government Properties from 1999 to Date has been drawn to the various publications on the decision of government in respect of the land earmarked for the construction of the State Secretariat (now commonly referred to as Ile Arugbo).

“The issue of the land in question came under the terms of reference of the committee which considered several other properties of government and submitted its recommendations in July, 2019.

“As was the case with all the properties looked into by the Committee, the committee’s recommendations are based strictly on available records.

“Based on the available records, the Committee did not see proof of any payment nor an approved Right of Occupancy,” Ajadi said.

According to him, the committee discovered that there is foundation on the land with erected columns at varying areas of the larger segment of the land.

“The Committee also noted that the land in question was also a part of a larger parcel of land, part of which has been developed into a Civil Service Clinic and Secretariat complex now housing the State Ministry of Finance, among others.

“With emphasis, from all records available, there is no “Right of Occupancy” or Certificate of Occupancy” available to the private firm which the land was allocated in principle.

“There is also no application nor receipt of payments for the land. Where, therefore, is the right to a claim to this land?”

He added that based on existing convention, land set aside by Government for specific public use should not be converted to private use.

“In view of the above reasons, the Committee is convinced to recommend that the land be repossessed and put to the original use it was meant for,” the committee chairman said.

Ajadi noted that the use of ‘Ile arugbo’ to describe the land in question gave an erroneous impression of a structured building where old people were catered for, adding “this is not so”.

“What is on ground until the physical reclamation by government was a shed used by the late Dr Abubakar Olusola Saraki to keep people waiting to see him for political meetings.

“In essence, the house built and lived by the late Dr Olusola Saraki is intact, not touched or demolished by the Kwara State Government,” Ajadi stressed.

He described it as absurd putting a political gathering place beside a clinic.

“A hospital is supposed to be a serene environment for welfare of patients; it is definitely not a political war centre where people make the loudest noise, fight, or found themselves enmeshed in commotion and fatal stampede which was the lot of that place,” Ajadi said.

Oh No! See The 10-year-old Boy Locked Inside Animal Pen For 2 Years By His Wicked Stepmother (Video)
Popular Stories