Kenyan Pastor Stabs Wife And Slits His Own Throat During Service


A Kenyan Pastor stabbed himself and his wife in church after they separated and had a quarrel over who should be in charge of the church. 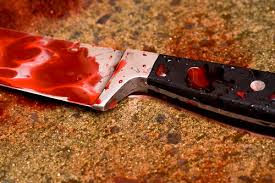 A Kenyan preacher stabbed his estranged wife and killed himself at the pulpit on Sunday in a church they co-founded in the coastal city of Mombasa.

Congregants at the church told journalists that Elisha Misiko was seated on the front pew when he walked over to his wife Ann Mghoi who was at the pulpit and stabbed her using knives hidden under his shirt.

He then stabbed himself in the stomach and slit his throat as congregants rushed to the pulpit.

He died on the spot while his wife died in hospital.

The couple was separated and had a quarrel over who should be in charge of the church, according to the Daily Nation newspaper.

The man left suicide notes in which he accused his wife of infidelity and plotting to edge him out of the church’s management, according to the Standard newspaper.

He also accused her of stopping him from seeing their four children after their separation.

A pastor in Mombasa County stunned faithful when he slit his own throat and died after stabbing his wife several times during a service on Sunday. pic.twitter.com/pWmmLL5S5e