A young man who was arbitrarily arrested and detained by federal agents is speaking to the media as he seeks redress in court. 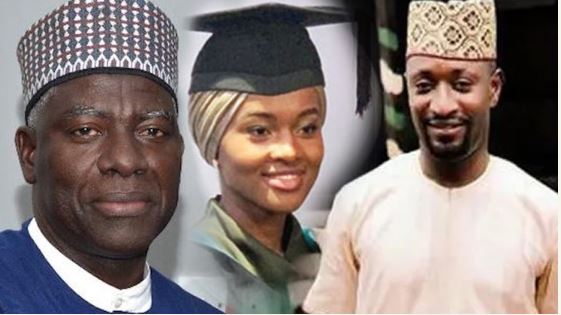 In this interview with ENIOLA AKINKUOTU of the Punch, businessman, Anthony Okolie, speaks on his 10-week ordeal in the custody of the Department of State Services after purchasing a Sim card that was once used by Hanan, the daughter of the President, Major General Muhammadu Buhari (retd.)

There are online reports about your ordeal in the custody of the Department of State Services.

Can you narrate in detail what happened?

In December 2018, I bought a SIM card, I registered and started using it. I did not buy it from a third party. I bought the SIM pack from the roadside and I was issued a receipt. I registered the SIM and my biometric data was captured.

So why were you arrested?

I am based in Asaba, Delta State. I had a business meeting with somebody and we were supposed to go to Onitsha, Anambra State, together. On getting to the man’s house, I saw some armed men taking him away.

While in the vehicle, I asked them to tell me what offence I had committed, but they did not say anything. They asked me to keep quiet. Then they took me to their office in Asaba. After a while, they said my arrest was ordered by the Presidency and I had to be taken to Abuja for questioning. The next day, they took me to Abuja by road.

What questions did they ask you?

They asked how I got the phone line and I told them the whole truth. It was at that point that they told me that the phone line belonged to Buhari’s daughter, Hanan. They said they would have to verify the information I gave them and that Hanan must corroborate my claim. They said she was the one who reported that her phone line had been hijacked. So, they asked her to come and clarify her allegation.

Did you meet Hanan?

No, I did not. She was contacted many times, but her response was that she was busy with her studies in the United Kingdom. They kept calling her for several weeks, while I remained in their custody. It was when she refused to show up after 10 weeks that the DSS said they had no choice but to release me. I remained there for 10 weeks because she did not clear me.

Were you aware that the line was pre-owned?

I noticed it when I bought the line. I used to receive a lot of phone calls from people who spoke in Hausa language and I kept telling them they were calling a wrong number. On some occasions, I received strange messages in Hausa on WhatsApp. I received family messages, too, but I never used such to impersonate anyone.

Are you saying you never used the telephone line to commit any crime?

No, I didn’t. I am not employed at the moment, but I do little business here and there to make ends meet. I supply building materials when I get the opportunity to do so. I was about to start a fish farm when I was arrested.

Were you allowed access to your relatives and lawyer?

I am not married. My relatives knew about my ordeal. Even they travelled to Abuja to see me, but the DSS did not allow them. Even the lawyers that came were not allowed to see me during the time I was in detention.

I wasn’t physically tortured. I was treated with decency and well-fed. However, I went through psychological and emotional trauma. I had never been detained before and the fact that I was being held against my will for not committing any crime affected me.

Did the DSS operatives interrogate you every day during the period you were in their custody?

No, I wasn’t interrogated every day. At some point, they forgot that I was in custody. One day, I asked to see one of their bosses and complained bitterly that I was kept in custody for no just cause. I complained to them that I could not remain in custody perpetually without being charged. It was at that point that they told me to contact a lawyer to take my bail.

Did they fly you to Asaba where you were arrested? Or were you released in Abuja and asked to pay for your transportation?

I was released in Abuja. They didn’t assist me with any form of transportation.

Did the DSS seize the SIM card from you?

No. I am still using it. They initially took it away from me when I was in their custody and then returned it when I was released.

Did they apologise to you after you were released?

No, they didn’t. They just said I should take it in my stride. They made me to sign some documents before leaving their custody. One of the documents stated that I must not take any legal action against them. At that point, I was willing to sign anything because I was desperate to go home.

How much has this ordeal cost you and your family?

I do not know the exact sum right now, but being in detention for 10 weeks cost my family and I a lot of money. My brother and parents had to travel by air from Asaba to Abuja about four times over this matter and they were not allowed to see me. We had to hire lawyers as well and things like this don’t come cheap. They lodged in hotels on several occasions. Also, the fish farm I was setting up had to be put on hold.

Inside the DSS cell, did you meet other people that were unjustly detained?

I heard of many similar stories. I also met Wale Bakare, who was arrested for taking part in the ‘Revolution Now’ protest. I did not witness any form of physical torture, though.

Will you be taking legal action against the DSS?

Yes, I will do that. I am going to hold a family meeting on the matter soon. I shall also meet with my lawyers on the next line of action. Since my ordeal went viral on the Internet, I have not felt safe at all because these people can track me at any time.