Indications emerged recently of George’s aspiration following the floating of a political group which was ostensibly a platform to kick off the Bode George’s project. 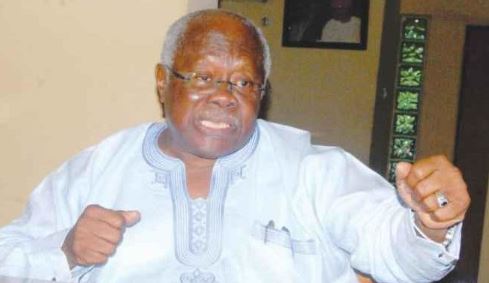 There is unease in the camp of the National Leader of the All Progressives Congress (APC), Asiwaju Bola Tinubu, over the presidential bid of the former Deputy National Chairman of the Peoples Democratic Party (PDP), Chief Olabode George.

Tinubu is believed to be warming up to take a shot at the presidency amidst agitation for the zoning of the position to the South-West.

Already, many groups and supporters of Asiwaju in Lagos have started mobilizing and canvassing support for the presidential bid of their principal, a former governor of the state.

Though Tinubu has not formally declared intention to succeed President Muhammadu Buhari as he has repeatedly said the time for 2023 electioneering is not ripe, his supporters are going ahead with the Tinubu project. But those advocating for Tinubu presidency are jolted by the aspiration of George.

Indications emerged recently of George’s aspiration following the floating of a political group which was ostensibly a platform to kick off the Bode George’s project.

Findings by a Daily Trust correspondent indicated that the camp of Tinubu views Bode George’s ambition with mixed feelings.

Though both are in different political parties, the reality that another candidate is emerging early from the South-West and Lagos in particular is being viewed seriously. An APC source said, “We have no problem with Chief Bode George declaring for the presidency.

But we expect him to rally round behind Tinubu who has done a lot for the South-West and remains a rallying force for the region in the present APC-led federal government.” But another source in the PDP hinted that the Bode George’s presidency fireworks would take a full swing by month end.

“We are going to come out with a bang and take on the issues with maturity and wisdom. This is a new order that we are convinced would take Nigeria to the desired level.”

Speaking with Daily Trust yesterday, a former organising secretary of the PDP in Lagos, Chief Mutiu Okunola, who had since defected to the APC and a strong promoter of Tinubu 2023, however, saw the aspiration of Bode George as good for agitation for power rotation to the south-west.

According to him, he was convinced that Bode George would see the need to step down for Tinubu. “Bode George is an asset and not a threat.

Tinubu is younger than Bode George, he has won Lagos before and he is still winning Lagos. Therefore, he is the main person contesting for presidency in the south-west,” said Okunola who is the coordinator and founder of Tinubu 2023 Not Negotiable (TNN).