Some UTME candidates have called out NIMC workers who allegedly extorted them in Nasarawa state. 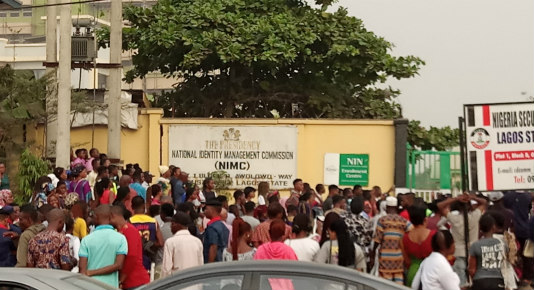 According to Punch Metro, scores of candidates seeking admission into various Nigerian institutions of higher learning through the Unified Tertiary Matriculation Examination in Nasarawa State have accused workers of the National Identity Management Commission of extortion.

A Punch Metro correspondent, who visited the Lafia office of the NIMC, observed that hundreds of prospective candidates were standing in long queues struggling to be registered in order to obtain their National Identity Numbers.

The NIN is now a requirement for all Nigerians wishing to sit the Joint Admissions and Matriculation Board’s organised examinations into tertiary institutions.

One of the candidates, Mr Sunday Michael, who spoke to Punch Metro in an interview, said he had been in the queue for over three hours.

He alleged that there were sharp practices going on because he and his friends were being asked to pay N1,000 before they could be registered.

Michael stated, “I came to the NIMCs office around 7.30 am and I have spent several hours here and I have not been registered. Those, who met me here, have manipulated their way and have since been captured.

“Some of staff members of the NIMC called me aside and told me that if I had N1,000 I should give them and I would be captured.”

Reacting to the allegation, the state Coordinator, NIMC, Ode Ebi, described it as baseless.

He said he had yet to receive any complaint from anyone with regards to any underhand dealings.

The NIMC boss explained that the crowd at the registration points were due to the fact that a number of Nigerians waited till it was almost too late to participate in the government programme before they showed up.

“For now, the office of the NIMC in Lafia, the Nasarawa State capital, will continue to witness a high influx of prospective candidates as far as the pronouncement of JAMB stands and it is hopeful that the inconsistent and frustrating process will be addressed,” Ebi added.