Shocking Story Of Man Who Killed His Son, Secretly Buried Him And Lied To Cover Up Crime In Kano


The story has been told of the man who killed his own son, buried him secretly and told horrific lies to cover up the evil. 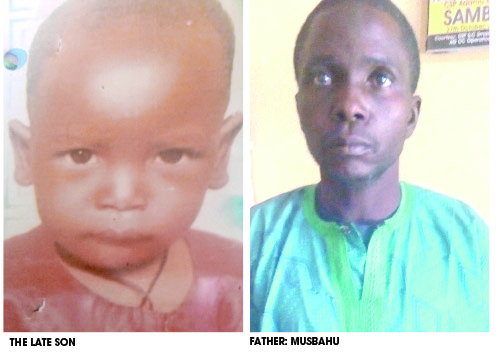 The people of Gaya town in Kano have been reeling from shock since detectives from Homicide Section of Kano State Criminal Investigation Department (SCID) of the State Police Command, arrested 25-year-old Mohammed Musbahu on the charge of filicide, the deliberate act of a parent killing his child.

Musbahu, a messenger at Gaya Local Government, Kano allegedly confessed to have killed his three-year-old son with rat poison and secretly buried his body in the cemetery five years ago in 2014. The victim was a product of his adulterous affair with a lady who was his girlfriend back then. The truth only came to light recently due to the pressure from the child’s mother to know his whereabouts.

The case was reported at Gaya Police Station by  Zulai Umar, the mother of the child, on November 19, 2019.

“I ordered detectives to join the men of Gaya Police Division to arrest the suspect, who is currently in custody at the State CID, and had confessed to having poisoned  his son, leading  to his death,” Kano State Commissioner of Police, Mr Rabiu Sani, affirmed.

Mohammed Musbahu in an interview with Saturday Sun gave a background that explains what drove him to take such an extreme action.

“I am a married man with three children, but I was befriending Zulai Umar and I impregnated her. She had a baby boy for me which she nursed until he was three years old. But in 2014, she wanted to marry and, therefore, brought my son to me. I accepted the boy but my wife didn’t. She called him a bastard. I couldn’t bear it and this resulted in a quarrel. My wife packed her luggage and left the house with our three children. I was left with my only son, Abubakar Musbahu. On the third day, I put rat poison in his food. He died and I immediately took his dead body to the cemetery in the town and buried him.”

Thereafter, he tried to make up with his estranged wife. “I called her and deceived her that the boy was not my son, that he was my friend’s son and my friend had come to take his son away. That prompted my wife to come back home with our three children and we had lived happily after then.”

How did he explain the absence of the child to other people?

“Anybody who asked me about my son, I deceived them that he was my friend’s son and his father had taken him away. This is what I had been telling my neighbours,” Musbahu stated.

He, however, had to come up with a more plausible story for the child’s mother.  “Whenever she (Zulai Umar) came around to ask for her son, I used to tell her he was with my grandmother. At a point, I told her he was schooling in Maiduguri.”

He was able to keep the secret for so long because “Even my father was not aware that I impregnated a girl who bore a son for me and my mother was no longer alive,” he explained.

Eventually, the child’s mother decided it was time she saw her son after five years.

“In November, she insisted that for almost five years she has not set her eyes on her son and that she wanted to see her son,” Musbahu said, “Then I had to confess to her that I used rat poison on his food and after he died I buried him at the cemetery in Gaya. I urged her to forgive me.”

Musbahu is an employee of Gaya Local Government where he worked as a messenger since 2014. He claimed he killed the three-year-old “because I want peace to reign in my family and I want my wife and three children to return back home.”

In Gaya town, Saturday Sun spoke with the Zulai Umar who gave further insight to her relationship with Musbahu that produced the son he killed.

Mohammed Musbahu was my former boyfriend, she said without preamble. “I knew at the time that he was married, but he later impregnated me and I had the son for him. When I was about to get married in 2014, I took Abubakar to him. He was three years old then. He [Musbahu] was aware that I was about to get married.  Since that 2014, whenever I went to his house to ask about my son, he would deceive me saying the boy was with his grandmother. At a point, he said the boy is schooling in Maiduguri, Borno State. When I could not bear it any longer, I told him I wanted to see my son. Last month [November] he told me the boy is dead. I asked him, how did he die? He said he poisoned his food and he had buried his body in the cemetery since 2014. I was temporarily mad. I couldn’t believe that he has been fooling me for a good five years, telling me that my son is alive.”

Consequent upon her report at the police station, Musbahu was arrested on December 4, 2019.

Zulai who is a mother of two in her present matrimony is seeking justice against her former boyfriend-turned-killer of their son.

“I cannot believe a human being can be this terrible. I just can’t believe Mohammed Musbahu can go to this length by using rat poison to kill his own blood”, she wailed.

One of the community leaders, Suleiman Mohammed, who spoke with Saturday Sun avowed: “Nobody ever suspected Musbahu of killing his son. He deceived everybody that the boy belonged to his friend and his friend had taken him away. And we had even intervened on his behalf to plead with his wife to return to their matrimonial home with their three children.”

This is the story she told Saturday Sun: “I didn’t know that my husband impregnated a lady since we married, but suddenly in 2014, a woman appeared with a three-year-old boy and handed him over to him. It came as a shock to me and I was angry with him. I already have three children for him. I told him I cannot accept a bastard in our matrimonial home. So I packed out of the house and took my three children away. Months later, he came and deceived me that the boy belonged to his friend and he has asked him to take his son. I agreed to return home after the community elders waded into the matter.”

Ladidi insisted, “I didn’t know he used rat poison to kill his own son,” asserting, “I don’t know yet whether I can continue living with this heartless man.”

Police are convinced it is an open and shut case. Aside from his incriminating confession, Commissioner of Police Rabiu Sani further disclosed that the suspect had taken detectives to the spot in the cemetery where he buried the corpse of the three-year-old. The suspect, according to him, will soon be charged to court after investigation is concluded.