Left Out In The Cold: The Sad Story Of Almajiri Children In Harmattan


Almajiri children go through a whole lot in Northern Nigeria especially during the harmattan seasons. 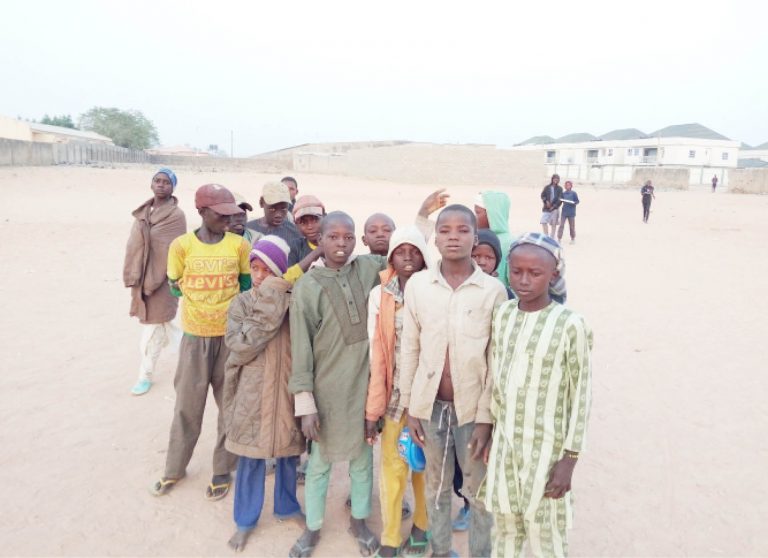 A group of almajirai searching for breakfast early in Kano

Usman was shivering from cold. The eight-year-old had no protective garb to shield him against the freezing weather. He wore tattered clothes that hardly offer any protection against the severe cold as he sat at a corner of a street in Sokoto metropolis struggling with the chilly wind.

Usman is one of the several young panhandlers with bowls that roam the streets. Usually moving in clusters of at least three, they wear torn clothes and look unkempt having had to trek several dusty streets without shoes. With the extreme cold weather in Nigeria, Usman as several others, who left their families to acquire Islamic education in schools, sleep in the open while some barely have clothes on as they move from place to place, begging to sustain themselves. Some of the children, called almajiris, do not enjoy any protection against the elements, during the day or at night when the cold weather increases. Usman declined comments as he wanted to be left alone.

“I have not had my bathe since the harmattan started,” Abba, another almajiri said. The eight-year-old said he was unable to get hot water and he could not use cold water because of the cold. While adults wore cardigans, Abba was not wearing any protective clothing, because he had none and could not afford to buy one.

Temperatures in the northern part of the country last week dipped exponentially, forcing many residents to stay indoors for most part of the day..

Unlike Abba, a 10-year-old Bello bath with cold water, “I get the water directly from a well and use it because there is nowhere I can get hot water,” he added.

Bello was, however, one of the few with a cardigan. “A family gave me the cardigan. I usually go to their house to beg for food, so when this year’s harmattan started, they gave it to me,” he said.

On his pale skin, he said it came with the weather and that it was that way because he does not have a body cream to apply on it.

Another member of the group, Aliyu, 9, said they always wait till 9 am before they leave their abode in search of food due to the weather, “We have to be out to get what to eat. We continue to cope with the weather since we do not have a choice. I don’t have a sweater, or a cloth to protect me from the cold. At nights we sleep without a cloth to cover our body,” he said.

In Kano State, some of the almajiris do gather around a fire to get warm. Yusufa, 11, and his friend Usman warmed themselves around such fires in Dakata area.

Yusufa was lucky to have a jacket, a cap, and a rubber shoe to keep him warm but for Usman and other almajiris that roam about the streets, most of them wear scruffy old clothes that barely cover part of their bodies. Some also walk bare-footed.

Most of the Tsangaya, the school meant for the almajirai, also serve as their dormitories. The schools are usually long verandas, covered by tarpaulins or cement sacks. They study there during the day and also sleep there at night. The older almajirai have some rooms, mostly attached to the houses of their teachers; they also sleep in their tens.

At night, when the cold is extreme, few of them had blankets, which they came with to the school, while others would have to sleep with their tattered cloths as the only cover to save them from the cold.

One of the teachers in Tudun Wada, Kano metropolis, Malam Khalid Muhammad Musa, said some parents brought their children without providing adequate clothing for them. He said it is the responsibility of parents to cater for their children.

“Some of the parents do provide clothes, shoes, blankets, and jackets for their children, but some shy away from these responsibilities. We usually talk to the parents to provide but we cannot force them to do that. Our own is to assist in teaching the children and only Allah pays us,” he said.

An almajiri, Sahabi Nasiru, at Minjibir area, was without a cardigan to shield him from the cold. He lamented, “I don’t have one and we suffer here. This is where we sleep. The cold and mosquitoes at night are unbearable, and we don’t have insecticide-treated nets to protect ourselves.”

Another almajiri, Ado Muhammad, 17, from Jama’are in Bauchi State, has been in the state for about five years. He said the jacket he came with was worn out and could not afford a replacement.

In Katsina, almajiris defied the extremely cold weather to besiege restaurants waiting for leftovers or to do menial work for food vendors. Most of them sleep in the open, verandas and balconies of shops and houses.

Daily Trust Saturday gathered that most of the almajirai come from the Niger Republic and some states in Nigeria. The young boys and girls are shabbily dressed and usually warm themselves at tea spots.

Some made out time to get firewood to make fires at their schools to get warm. There is an estimated 462, 212 almajirai in Katsina, according to a 2014 headcount.

The daily chores of almajirai begin as early as 6 am in Zaria. They are gathered in groups, struggling to put woods together to make a fire to get warm. The fire is usually set at the precinct of almajiri schools. They take their morning classes, for about one hour, around the fire. After the class, they set out in clusters to beg for breakfast.

Sani Tijjani, 9, has a quivering countenance as he knocks on doors begging for food. His Wahideen (Arabic word used by almajirai to beg for alms, which implies the oneness of Allah) was not as smooth as the weather makes his voice tremble. Tijjani continued to struggle with the rendition as failure would mean no breakfast for him. He did all these in the cold without a jacket. He did care about the weather but cares more about the food. Tijjani said he could spend the entire morning without food.

He added, “To avoid such bad situations, my colleagues and I work as servants in this neighbourhood. In the house we work, they send us on errands, especially buying soup ingredients. While their children go to school, we wash their clothes and even plates as well as other utensils.

“During lunchtime, since their children don’t come back from school until around 5 pm, we take the food flasks with their lunch to give them in school. This is how we get our three square meals. However, some of us are not necessarily begging for our use, but we usually take the food we begged to our seniors who are above ‘begging age.”

He said if one was not lucky to get food for his seniors, especially in the night, he would sleep on the floor at any available open space.

Musa Danladi described almajiranci (seeking knowledge) as a “journey of cruelty”, which parents with “inhuman” hearts make their children to embark on.

He added: “As a Muslim, I see this as a stain on the religion of Islam. There are better ways that we can organise this almajiranci without necessarily embarrassing our religion. I always wonder how one gives birth to children and just send them out for the world to take care of them. I hope relevant stakeholders would take measures to address this menace.

“Where these boys live is an eyesore. They live amid bugs and other insects. They usually sleep on the bare floor. They don’t have toilet facilities and this makes them defecate at any available space. Please tell me how can teaching and learning take place in this type of environment? I think our people should fear Allah and stop punishing innocent children in the name of seeking for knowledge.”

Funtua, Katsina State is one of the coldest places in Nigeria. Despite the cold weather, some children sleep in the open and walk without shoes or jackets.

“Our teacher only provides us with shelter and when the clothes our parents bought us wore out we are to either beg for others or we do menial jobs and buy what we need,” said Hamza Dalhatu, a 15-year-old almajiri.

He said students only have blankets and other cold wears if they can afford them after some menial jobs. He stressed that coping with the biting cold was not easy as they have no choice but to go out early morning and in the night to beg for food.

Zubairu Sani, 12, said his father bought all the clothes for him before he was brought to the school in Funtua.

“I am from Gatakawa village in Katsina State and normally new students are brought in after the harvest period when the cold season sets in. Parents, therefore, buy blankets, sweaters and head warmers for us before they bring us here,” Sani said.

A teacher at the school, Alaramma Salihu Adamu said there are 20 pupils under his care.

“Most of the schools where the pupils are suffering for accommodation have a large number of pupils that surpasses the capacity of the teacher. I managed to provide two rooms for them and God so kind only one pupil suffered from the acute cold attack and has recovered,” said Mal Adamu.

He added that different survival strategies were adopted by them in a difficult time.