The mother of the Kenyan pastor who was stabbed by her husband reveals that her daughter had complained about harassment and threats from her estranged husband. 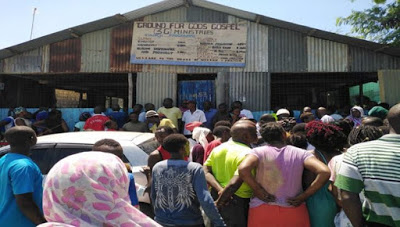 Scene of the unfortunate incident

My daughter died a very painful death. Why did the man she had separated with follow and kill her in cold-blood. Those are the words of a grieving mother, Magdalene Maghanga.

The events leading to her daughter’s death started in the most revered and most unlikely place -- in a church.

Ann Mghoi was stabbed several times by her estranged husband, a fellow pastor, inside the church they had spent years to grow, Ground for God’s Gospel 3G Ministries.

The husband, Elisha Nandoyi, requested the congregants to close their eyes in prayer and then pounced on his wife, stabbing on her back and hands.

Seeing what he had done, and quickly enough before the disarmed congregants responded to his wife’s cries, the man slit his own throat, dying on the spot.

Ann still had hope and was dashed to hospital where she succumbed to her injuries.

Now speaking for the first time since the January 5 incident, Ann’s mother revealed that her daughter had complained about harassment and threats from her estranged husband. The family is yet to come to terms with the atrocious murder.

“When she complained about the woes in her marriage, we advised her to stay away from her husband but the husband seemed not ready to accept that until he killed her,” said Magdalene.

The chairlady of the group that runs the church, Gladys Kingi, said they had advised Ann to move to Voi after her husband started issuing death threats.

Gladys said the church plot would be handed over to Elisha’s family but the church music equipment will be given to the congregants since they were bought with their contributions.

“We have no problem with his plot, it belongs to him and we leave it to the family to repose it, what we can’t let go is the music equipments because they were bout by the church,” said Gladys.

This is as fresh details emerged that Elisha had officially transferred the plot to his estranged wife through an agreement signed and witnessed by Josephine Musumi, Gladys Kachanze, Peter Kibanda, Mathia Chanda,C onstantine Wachenje and Damaris Kamuya.

According to the signed agreement seen by K24 TVdated February 03, 2019, Elisha had willingly given out the parcel of land to his wife without undue influence.

Elisha’s family, through Violet Belia, a younger sister of the killer pastor said he was their sole bread winner.

Belia now asks the government to help them fulfill the wishes her killer brother listed in his 17-page suicide note, including the family getting the plot the church stands on and the church equipment.

The two families have agreed to bury their own separately and post-mortem exercises were planned for Monday, January 13, 2019.

Ann’s body will be buried at Mghangenyika in Taita Taveta County while that of her husband will be laid to rest at Maragoli village in Vihiga County.

The couple left behind four children and the first born is a Form Four candidate in a school in Taita Taveta County.