Two men have been nabbed with as many as 40 bags of Indian Hemp in a community in Ogun state. 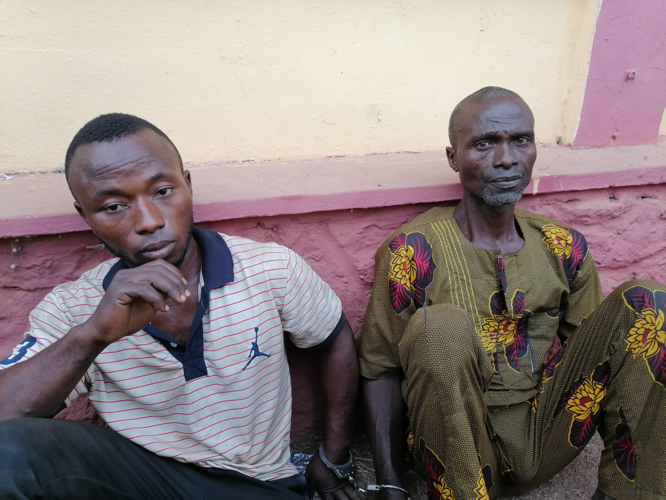 According to a report by NewTelegraph, the Police in Ogun State have arrested two suspects for allegedly transporting 40 bags of Indian hemp and 11 packs of skunk, a hard drug known as “Next Level.”

The suspects, Audu Sulaiman and Lateef Ganiyu, were arrested on Igboora Road with their Chevrolet bus marked KSF 390 XS, which was used to convey the drugs.

The remaining suspects were nabbed for offences ranging from armed robbery to kidnapping, burglary, vandalism and impersonation.

Briefing journalists, Ebrimson disclosed that the suspected drug traffickers were intercepted last Thursday at a pin-down point on Igboora Road by operatives of the Special Anti-Robbery Squad (SARS).

The police boss said efforts were ongoing to apprehend other members of the syndicate, now at large.

He said: “On the 9th of January, 2020, about 4a.m., based on technical intelligence gathering, some hoodlums who specialised in large quantity supply of weeds suspected to be Indian hemp as means of livelihood, operatives of SARS led by ASP Olayiwola Babatunde, who were on pin-down point on Igboora Road, intercepted a Chevrolet bus with registration number KSF 390 XS loaded with 40 bags of weeds suspected to be cannabis. The two occupants of the bus were arrested along with the exhibit.”

Ebrimson promised that the suspects and other criminals would be charged to court and prosecuted accordingly.

But speaking with New Telegraph, the suspects said they were merely transporters who conveyed the “consignment” to the destination.

Sulaiman, who claimed to be involved in rice smuggling before his arrest, said he and his partner were promised N100,000 to convey the bags of weeds.

He said: “We were transporting the bags from Idere near Igboora in Oyo State. I don’t know the owner but I know the destination point. I also knew the bags contained Indian hemp. This is the third time I’m transporting it.

“I was taking this consignment to Rounder area in Abeokuta to meet Mr. Samuel. He is supposed to receive it. But he is now on the run.”

On his part, Ganiyu, who claimed to be a mechanic before venturing into smuggling of cannabis, said he accompanied Sulaiman on the trip as motor boy.

He, however, pleaded with the police authorities to temper justice with mercy and pardon them.