Nigerian Man Apprehended In India For Offering Fake Jobs In US


A Nigerian man has been arrested for defrauding people on the pretense of offering them placements in the United States. 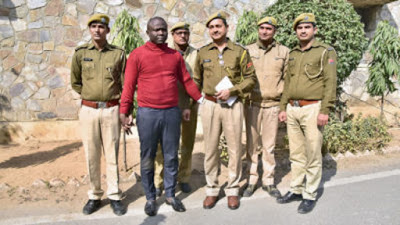 The suspect with security officials

The police in Kerala India have arrested a Nigerian, Kolawole Boboye, on the charge of operating an online job racket, offering non-existing jobs in the United States.

According to The Hindu newspaper, Boboye arrived in India on a student visa and repeatedly indulged in various online advance fee frauds.

One of the scams he perpetrated was sending emails to people offering them placements in the United States. A resident in Thiruvananthapuram, Nandana, fell for the bait.

Over several months, the victim electronically transferred cash to various account numbers sent to her by the suspect. Boboye had allegedly promised the trained pharmacist a job in Flowers Hospital in Dutton in the United States. The accused had siphoned off ₹1.3 lakh from the woman as an advance fee for processing her job visa and making her travel and stay arrangements.

The investigators traced the digital footprints left by the suspect on internet banking sites and social media and tracked his mobile phone communication. Several leads turned cold, but the investigators soon struck gold. They followed the accused to his location in Mumbai. The police said the suspect used many ATM cards and fictitious identifies for the fraud. They said the fraud detected so far was just the tip of the iceberg.

The accused was produced before the Chief Judicial Magistrate Court, Thiruvananthapuram, and remanded in judicial custody