From Okorocha's 'Hammer' To Trouble With SPIP: How Uzodinma Fought His Way To Victory


The story has been told of how Hope Uzodinma fought his way to becoming the governor of Imo state. 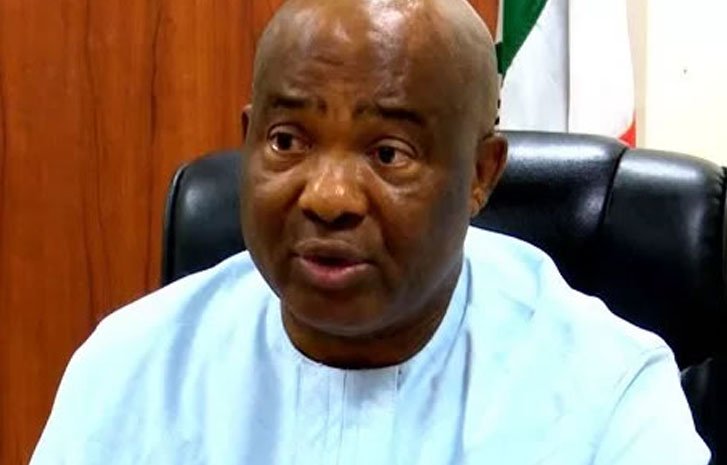 When the Independent National Electoral Commission (INEC) announced result for the 2019 governorship election in Imo, Hope Uzodinma, candidate of the All Progressives Congress (APC) came a distant fourth while Emeka Ihedioha, candidate of the Peoples Democratic Party (PDP) emerged winner.

The turn of events came as a surprise on Tuesday as the supreme court sacked Ihedioha and asked INEC to return Uzodinma as the duly elected governor of the state. It has not been a smooth ride for Uzodinma, a ranking senator, since he joined the 2019 governorship race as pre and post election events appeared not to favour him.

The APC crisis in Imo began when Rochas Okorocha, then incumbent governor, wanted Uche Nwosu, his son in-law to succeed him. This led to the party splitting into two factions. While one presented Nwosu as the party’s candidate, the other had Uzodinma. The national working committee of the party, however, recognised Uzodinma as its candidate. This didn’t come without its attending controversy. Ahmed Gulak, the much pressured chairman of the APC primary election in the state, reportedly ran away from his hotel room in the midnight, and would declare Uzodinma the party’s candidate later in the morning. There were reports that some persons who were against the governorship bid of Uzodinma wanted to abduct Gulak.

When in November 2018, an Imo high court validated Uzodinma’s candidacy, Okorocha advised his son in-law to defect to the Action Alliance (AA), and at the time he stood a stronger competitor to Ihedioha.

By the time President Muhammadu Buhari campaigned in Imo, he found it difficult to publicly endorse the APC candidate. Although he raised the hand of the governor-elect and handed over the APC flag to him, the president asked Imo people to vote candidate of their choice.

The matter also led to a rift between Okorocha and Adams Oshiomhole, the national chairman of the party who had backed Uzodinma. The crisis, pundits argued, gave PDP more chances in the state.

Were Uzodinma and Okorocha to be on the same page, things perhaps may have been tougher for Ihedioha. Okorocha, who was APC senatorial candidate, literally dumped his party’s governorship candidate and had mobilised resources and support for his in-law who was running under another platform.

As the election drew nearer, the contest was clearly between Nwosu and Ihedioha, while Uzondinma was struggling. Earlier, in 2018, Okorocha had dismissed the chances of Uzodinma.

“APC members in Imo see Chief Uzodinma as still a staunch member of PDP and that was the reason behind the dead silence in Imo over the announcement of his name as the governorship candidate of the party. If Chief Uzodinma was to be a known member of the party, there would have been celebration in Imo. The chieftains of the party in Abuja backing him are elite politicians who have no relationship with the grassroots,” he had said.

“Chief Uzodinma can never win election in Imo in a fee and fair election. And that is why the PDP and APGA members are those celebrating his K – leg governorship Candidature for Imo APC.”

ARRESTED ‘OVER BREACH OF CONTRACT’

While other aspirants had settled in well on their campaign, Uzodinma yet had another case to sort with the special presidential investigation panel for recovery of public property panel.

The panel, in November 2018, announced that it had arrested. He was accused of not executing a $12m contract awarded his company by the Nigerian Ports Authority (NPA) for the dredging of Calabar channel.

Okoi Obono-Obla, the now suspended chairman of the panel, however, had maintained that Uzodinma’s arrest had nothing to do with the crisis rocking the state chapter of the APC.

But Okorocha won’t allow Uzodinma rest yet. He said Uzodinma was desperate to become governor so that he would evade trials.

“His ideas is that once he becomes governor, he would be leveraging the immunity provision to evade these trials,” the former governor had said.

CLASH WITH NWOSU AT APC RALLY

Even when he had defected to the AA, Nwosu still held onto the APC. His supporters mounted billboards of him with Buhari, APC presidential candidate, across the state.

Against warnings, Nwosu broke into an APC rally in January 2019, and his presence led to a clash. His supporters were seen with his posters and were chanting songs of victory that was almost humiliating Uzodinma who primarily should be the beneficiary of the rally.

Scores were injured and Okorocha would later blame this on Uzodinma whom he accused of hiring thugs to disrupt the event. He went ahead saying “the alliance between AA and APC is a perfect one. We are working to deliver President Buhari and Uche Nwosu in the state.”

EXPELLED FROM THE APC

Barely two months to the election, the state chapter of the APC expelled Uzodinma over alleged anti party activities. He was accused of working with Osita Izunaso, the Imo west senatorial candidate of the All Progressives Grand Alliance (APGA). The party had wanted him to be on the side of Okorocha, its candidate for the senatorial seat.

“This is to inform you that the All Progressives Congress, Omuma Ward of Oru East Local Government Area in Imo State, has expelled Senator Hope Uzodinma from the party due to certain inordinate and anti-party activities perpetrated by him and his cohorts,” the party had written in a statement.

LOSING AT THE TRIBUNAL, APPEAL COURT

After losing at the election petition tribunal, the court of appeal in Abuja in November again dismissed Uzodinma’s and other several appeals challenging the victory of Ihedioha  in the March 9 election.

The first appeal was filed by Nwosu, Uzodinma and Ifeanyi Ararume, candidate of the All Progressive Grand Alliance (APGA) who had come third in the election.

They asked the appellate court to upturn the judgment of the Imo state tribunal which affirmed the victory of Ihedioha. The appellants claimed that the governor did not obtain the constitutional one-quarter of the votes in at least two-thirds of the 27 local government areas of the state, in line with section 179 of the constitution.

They also claimed that the election was marred by irregularities and failure to comply with the electoral act.

The five-member panel of the appeal court, however, dismissed the appeals on grounds that they lacked merit.

Tuesday’s judgment favouring Uzodinma would make it the first time the apex court would nullify election based on election petition.