Kidnapping: Katsina Imposes Time Limit On Use Of Tricycles, Motorcycles


The Gov of Katsina has placed a curfew on okada and tricycle riders in order to curb kidnapping and other vices in the state. 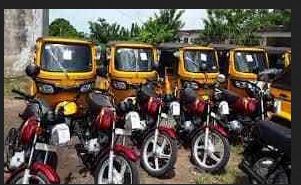 Gov. Aminu Masari of Katsina State has signed an Executive Order prohibiting the use of motorcycles and tricycles between 7 p.m. and 6 a.m. across the state.

The state Attorney General and Commissioner of Justice, Alhaji Ahmed El-Marzuq, who announced this on Wednesday in Katsina, said the dusk-to-dawn curfew takes effect from Jan. 20.

He explained that motorcycles and tricycles will be allowed to operate in the state within 6 a.m. and 7 p.m. due to the rate of kidnapping in the state.

He said, “Section 5, subsection 2 of the 1999 Constitution as amended, conferred on the governor power to sign the order.

“The order is Motorcycle and Tricycle Restriction Movement 2020. Under the order, he has prohibited the movement of motorcycles statewide from the hours of 7 p.m. to 6 a.m., with effect from 20th January 2020.

“This order shall apply to all and sundry in the state.

“However, there are exceptions. The order shall not apply to the members of the armed forces, the police, other paramilitary agencies like the FRSC, civil defence, immigration, customs and other security agents,” he said.

He said that it was pertinent for all and sundry to obey the order, warning that violators would be jailed for up to one year with the option of fine or both as prescribed by the Penal Code.

El-marzuq said that the measure was aimed at protecting the lives and property of people of the state.

“Most of the kidnappings and other criminal activities are perpetrated within these hours using this means of transportation.

“People are not restricted to move, they can use motor vehicles.

“By the time the situation normalises, the order will be reviewed,” he said.