A young lady who was sold off into prostitution for about 500,000 Cefa has opened up about her ordeal. 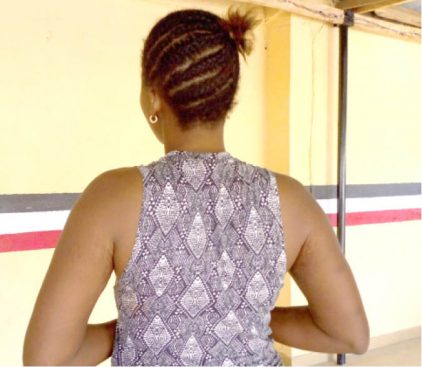 The suspected ring leader of a human trafficking syndicate, Michael Omowunmi, after her arrest by officials of the Nigerian Security and Civil Defence Corp in Lagos for trying to traffic four ladies to Mali

According to a report by Daily Trust, an 18-year-old victim of a human trafficking syndicate, Victoria Oshioke, has narrated how her boyfriend sold her into prostitution for 500,000 cefa (about N350,000).

Operatives of the Nigerian Security and Civil Defence Corps (NSCDC) disclosed yesterday that they rescued Oshioke, along with three other girls, from the leader of a human trafficking syndicate.

years ago when she was 16-years-old and taken, first, to Cotonou, Republic of Benin and later to Mali to engage in prostitution.

But, as she said, she found her way back to Nigeria because she could not cope with the stress of having sex with different men.

She said, “The syndicate took me to Mali where I was made to sleep with different men. I came back two years ago and later got a call from my boyfriend, Maxwell, that I should come to Benin. I was living in Auchi then. When I got to Benin along with my elder sister, my boyfriend asked me to go back to Mali.

“I refused. In the midnight, he threw us out of his apartment. For fear of being attacked, we agreed to go. The next day, which was

Tuesday, he put us in a bus coming to Lagos after calling his contact, who resides at Iyana-Ipaja.”

NSCDC officials had arrested the suspected 30-year-old contact, Omowunmi Michael, at her Iyana-Ipaja, Lagos, residence and rescued Ishioke, together with three other girls, who were identified as Joy Aloaye, 22; Amaka Eze, 23; and Anuoluwapo Mustapha.

Daily Trust learnt that Omowunmi Michael’s arrest was sequel to a disagreement between her and the girls over how much each of the girls would pay her.

The suspect had allegedly demanded an upfront payment of N1 million from each of the girls before she would hand them over to the syndicate’s leader in Cotonou.

The girls were, however, understood to have refused to give Michael any commitment to that effect and she allegedly threatened to return them to Edo State.

It was further gathered that two of the girls, Aloaye and Oshioke, stormed out of the house in anger and proceeded to the main road where they asked a truck driver to give them a lift to Benin.

It was at that point that the NSCDC officials sighted them and took them in for questioning.

Parading Michael at Alausa, Ikeja, the Commandant of the NSCDC, Lagos State Command, Cyprian Ehi Otiobhi, alleged the suspect was apprehended on Wednesday January 15, 2020 at No. 13, Abuke Oku Street, Iyana Ipaja, at about 9.20am for attempting to traffic four ladies to Mali for prostitution.

“Two of the victims, Victoria Oshioke and Joy Aloaye, were transported from Benin, Edo State, by one Favour, who is currently on the run, while Amaka Eze, who hails from Onitsha, Anambra State, was linked to the suspect by one Lekan,” he added.