Governor of Abia state, Okezie Ikpeazu has been accused by his party member of being a mole of the ruling party. 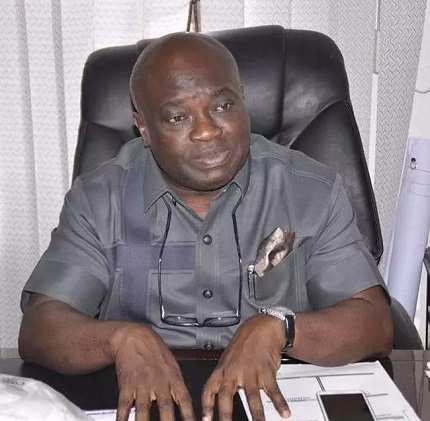 Governor Okezie Ikpeazu
A stalwart of the Peoples Democratic Party, Timi Frank, has replied Abia state governor, Okezie Victor Ikpeazu, describing him as an APC mole in their party.
Recall that the governor had on Sunday issued a statement attacking the former APC deputy spokesman over his earlier statement that most PDP governors were not committed to the opposition politics in Nigeria.
However, responding to Ikeazu’s reply, Comrade Frank, in a statement issued on Monday, wondered that rather than apologise for his misadventure, “the governor’s shallow defence as to why he chose to jet out with Mr President sacrificing his party’s National Executive Council (NEC) meeting, confirmed the impression in some quarters that he is truly an APC mole even as a PDP governor.
“In Shakespeare’s play, Hamlet, Queen Gertrude said: “The lady doth protest too much, methinks”. She did this in reference to the insincere overacting of a character in the play.

“From that day to today, nothing has changed. Insincerity is most obvious in overly dramatic denials. And this is what we see with Okezie Ikpeazu’s response to my candid observation.
“The popular saying that an old woman is always uneasy at the mention of dry bones manifested itself in the reply of the incompetent Governor Ikpeazu to my statement I criticised him for hopping off to London with President Buhari in the midst of a serious national and political onslaught against the PDP, in Imo State.
“Playing the ostrich, Ikpeazu pinned his trip with the President to the UK-Africa Investment Summit on the quest market his proposed Enyimba Economic City Project to foreign investors.
“Does a man go on a jamboree when his house is on fire? That is the question that Ikpeazu should answer rather than play acting in his protests that represent his guilty conscience,” Frank quipped in the statement.
The Bayelsa born political activist equally cleared the air on the allegagtion by the governor that he (Framk) was used and dumped by the APC, stressing: “Let it be known to the indolent governor that I resigned from the APC and refused to hero-worship President Buhari when the APC derailed and began to pursue anti-people agenda rather than what they promised Nigerians.
“How can I then be compared to an Ikpeazu, whose sycophantic laugh almost tore his mouth while he was throwing himself at General Buhari, to secure his post gubernatorial future?
“For the records, I stood my grounds while in the APC and I resigned my position as a principled person and not because of any political gain. And since the governor talks about political worth and jobbing, perhaps it is pertinent to expose him at this juncture for who he truly is.
“That Ikpeazu calling himself a national leader of the PDP is self delusional dream. Within the party, he is known for what he is, an unreliable person who would rather jamboree while there is fire at his doorstep. In case he does not know, Ikpeazu is as relevant to the PDP as the “P” in psychology.
“It is most unfortunate that in Ikpeazu’s little world and mindset, it is only with the President that he can get attention. this reflects his lack of initiative, drive and dynamism to push any project to profitability,” Frank fired in the statement.
On the reason the governor traveled with the President, Frank believe that “projects such as Tinapa in Cross River state and the mechanised farm in Kwara state, sold themselves out to foreign investors on account of well-thought-out and executed marketing strategies which the governors of the states embarked on at the time and not because they carried empty brief cases on presidential trips looking for uninterrupted hours of snitching and mundane political theatrics with the President.
“One wonder the kinds of investors Ikpeazu is looking for in UK when he is one of the worst governor who doesn’t pay regular salary in his state.”
On why the governor is a mole in the PDP, Frank said Ikpeazu was among the PDP governors that gave General Buhari and the APC 25 per cent vote in return for second term, “in short, Ikpeazu is a confirmed PDP by day and APC by night.
“The Abia governor capitulated when he posited in his reply that, ‘Much as Governor Ikpeazu is not responsible for Timi’s unguarded spleen, no leader would prefer to attend a party meeting to attending a Summit where his ideas and programs for his people will be beamed at the global stage.’
“If for the sake of argument we yield to this convoluted reasoning, is he also saying that that the PDP’s NEC was not worth the attention of his deputy? Clearly he was sending a clear message of disdain to the party to impress his pay masters.
“When I alluded to Ikpeazu as a political hatchet man and mole for the APC, no fact underscores this than the 2015 and 2019 presidential election results in Abia State.
“Can Ikpeazu who regards himself as a PDP national leader explain to Nigerians how General Buhari and the APC scored 13,394 votes against the PDP’s 368,303 in the 2015 presidential election – removing from the list of states that the APC had 25 per cent and then clearly explain to Nigerians, how in 2019 presidential elections, the APC and General Buhari scored 85,058 and PDP PDP scored a depleted 219, 698 votes?
“The simple answer to this eye popping revelation is the liability Ikpeazu is to the PDP and the reason he is all cheeks in smile with the President and perhaps while he will continue to be a sacred cow at the Supreme Court.
“May it not be the lot of Abians and the PDP in particular that tax payers money is being blown on the altar of presidential patronage and clandestine investor chase.
“Ikpeazu can catch his fun and be a political undertaker, however, the PDP and Abia people deserve more compassion,” the statement from Frank read.
Top Stories