A Boko Haram attack at a UN building in Borno which left the facility burnt down has been condemned. 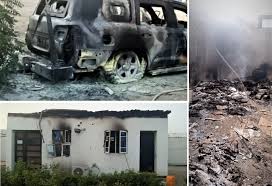 Boko Haram terrorists attack UN Building in Borno
The United Nations (UN) has condemned the attack on its facility in Borno State last Saturday by Boko Haram, according to Sunnewsonline.
Speaking about the incident, the UN Humanitarian Affairs Coordinator in Nigeria, Mr. Edward Kallon, yesterday said the facility sited at Ngala, a town along Nigeria-Cameroon border, was used to accommodate humanitarian aid workers. He described the attack as a direct assault by the insurgents on the UN.
“I am outraged by the extremely violent attack on this key humanitarian facility where five United Nations staff were staying at the time of the incident. An entire section of the facility was burnt down as well as one of the few vehicles UN agencies rely on for movement and aid delivery,” Kallon said.
He said protective measures deployed to the facility prevented any harm to staff present  when the incident occurred. Kallon  said the incident had a disastrous effect on the most vulnerable people in the area who depend largely on aids from the UN and other  international aids support organisations for their survival.
The UN official said aid workers were providing assistance to over 55,000 people in Ngala alone. According to him,  more than 10,000 displaced persons from neighbouring communities arrived the town in 2019 in search of food,security, water and medication. He called on Boko Haram to respect the principle of humanity, neutrality, independence and impartiality which the UN agencies stand for in any conflict.
However, Chief of Army Staff, Tukur Buratai, has described the recent activity of Boko Haram insurgents as ”the kicks of a dying horse gasping for the last breath”.
Boko Haram has stepped up attacks on military formations and civilian population in the North-East.
He also asked local and foreign bodies to be mindful of the comments they make on Nigeria’s security.
Buratai’s warning came a day after the European parliament, a legislative branch of the European Union, said there has not been progress in the fight against Boko Haram insurgents. The parliament in its January 16, 2020 resolution said the security situation in Nigeria has deteriorated significantly.
Aminu Iliyasu, the army operations media coordinator, in a statement on Monday, said the army chief has asked those bodies to make utterances that would help restore peace.
“The Chief of Army Staff, Lt General Tukur Yusufu Buratai has reassured Nigerians that the counter insurgency operations in the north-east and indeed other ongoing operations against our common enemies across the country are still on course with current indicators revealing tremendous successes across the various theatres of operation,” the statement read.
“After a careful review of the Nigerian Army operations in the north-east, it is pertinent to state that, Headquarters Nigerian Army has gladly observed the renewed zeal and determination by troops to take the counter insurgency operations to its logical conclusion with outcomes favourable to Nigeria and Nigerians as evident in the recent decimation of many Boko Haram/Islamic State West Africa Province criminals, including some of their top commanders amidst  several arrests of the insurgents’ logistic suppliers and collaborators, numerous capture of the criminals’ arms and ammunition as well as rescue of many captives from the bondage of the insurgents.
“To this end, all local and foreign interests are advised to exhibit more commitment and restraint on issues of our national security and avoid taking sides. Furthermore, all actions and utterances must be tailored towards supporting the national cause with a view to restoring peace and tranquility to our beloved country.” Buratai assured troops that their sacrifices and that of their fallen colleagues would never be in vain.
He also “warned all enemies of Nigeria and Nigerians who take delight in the suffering of our innocent citizens that the day of reckoning is at their door steps”.
Top Stories