A man has become a source of inspiration for many people after purchasing an expensive bike in order to return it to its owner. 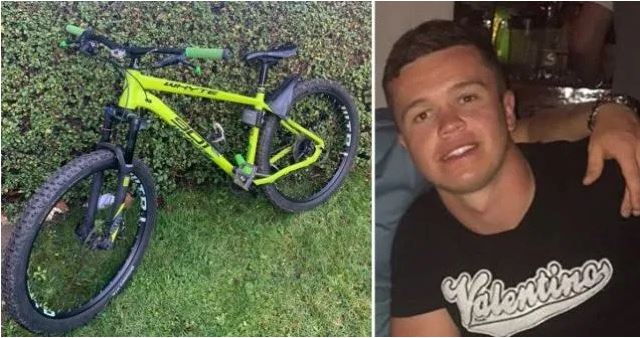 Ste Burke
A man identified as Ste Burke, has bought an expensive stolen bike just so he could return it to its owner because he knew ‘someone had paid a lot of money for it’.
The 26 year-old paid £80 for the bike, which he knew cost over £1300, after being approached by three men who asked him if he wanted to buy it.
He says he realised the bike was stolen after noticing a bike lock on the back wheel when the men approached him.
He told Metro.co.uk: ‘I had just come home from the gym and I was getting my gym bag out of the back of my car to go inside my home when I was approached by 3 men carrying the bike.
‘That was my first red flag, then I saw the bike lock on the back of the wheel and he wanted to sell a £1350 bike for £100. I offered him the £80 and he took it. ‘So as soon as they left I put it on Twitter because I knew it wouldn’t have been stolen far away as it was locked.’
After the post went viral, Ste was contacted by a woman claiming to know the original owner, who she put him in contact with.
A few hours later the man met Ste and had the key to the lock as well as the paperwork for the bike, including a receipt.
Ste said: ‘He thanked me as his home was recently burgled and it’s a bit of good news for him through the hard time he’s going through.
‘He told me he got paid on Friday and could he send me the money then and I said no. I told him I didn’t feel right taking money off a man who has just had his house burgled.’
Following the incident, Halfords have been in touch with Ste to offer him a free bike of his own, however, he says ‘he didn’t do it for free stuff’.
He said: ‘Halfords have been very kind reaching out to me, I didn’t do it for free stuff I just did it because I knew someone’s paid a lot for it.’ He was also happy to have received the praise of rapper Stormzy who he said was his ‘hero’.
Top Stories