One of the kidnappers who was arrested by the police confessed to kidnapping a boy, collecting ransom and attending the mother's burial after she died of shock. 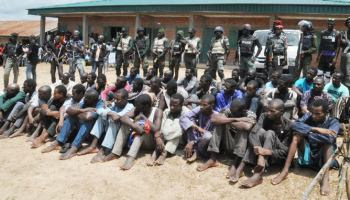 One of the 30 kidnappers arrested by operatives of Operation Puff Adder, launched by the Inspector General of Police, yesterday, in Kaduna revealed how they kidnapped the son of a woman living in their neighbourhood, who later died from a heart attack due to shock.

The suspect, Saidu, said after the gang collected N6million ransom for the boy’s release and he was part of those that attended the burial of the late woman.

He said he got N200,000 from the ransom and that the Police later arrested him and three members of the gang while two others are still at large.

Another gang member, Ibrahim Suleiman, said they were arrested while planning to kidnap Modibo, the Chairman of Kagara Local Government Area of Kaduna.

He said his gang was sent by ‘Yellow’, their leader, who resides in a Zamfara forest, to take a letter to Modibo to pay N40 million or risk being kidnapped.

“We kidnapped one Alhaji Mayake, his wife and his children. We collected N4 million ransom. But the victims, apart from Mayake are still with Yellow in the Zamfara forest.

During the parade of the 61 suspects arrested for various offences, Force Public Relations Officer, Frank Mba, said a total of 31 assorted weapons were recovered from the gangs.

The Force PRO also paraded a motorcycle used for smuggling arms and ammunition caught with two AK-47 rifles and 150 rounds of live ammunition hidden in it.

Mba also disclosed that new Police patrol vehicles and other equipment, including mobile CCTV cameras and safer highway equipment have been distributed to Police formations across the country to enhance crime-fighting and prevention efforts.