Some suspected criminals who supply arms and charms to bandits have been nabbed by the police. 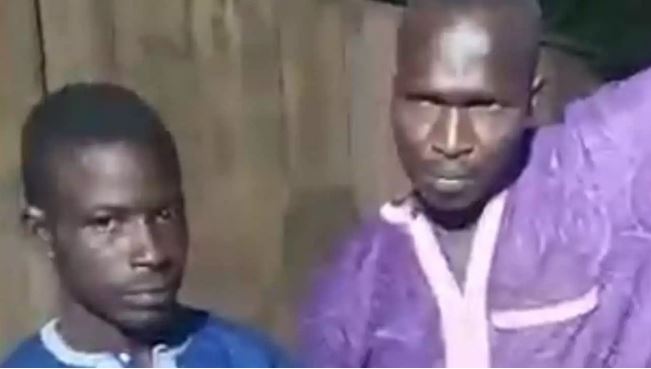 PRNigeria reports that detectives of the Inspector General of Police (IGP) Special Tactical Squad (STS) have arrested two men who transport and supply dangerous ammunition to bandits in the North-West.

The dare-devil criminals were arrested on Tuesday while transporting a consignment of firearms to one of their dealers inside a forest, in a blue vehicle.

The operation to arrest the criminals was led by the Sector Commander of Kano-Kaduna Unit, DSP Husseini Gimba.

In a video obtained by PRNigeria on Wednesday, the gunrunners explained in Hausa language their modus operandi in transporting weapons and charms to bandits.

Meanwhile, the IGP STS, led DCP Kolo Yusuf with the support of hunters and volunteers, has raided Kangon Uzoh Forest mountain via Bangi LGA Niger where they arrested more kidnappers and rescued the victims.

Twin anti-kidnapping policemen, DSPs Hassan and Hussaini Gimba, played prominent roles in the recovery of sophisticated weapons, ammunition from bandits/kidnappers in that axis.

Parading about 60 suspects at Katari in Kaduna, the Police Spokesperson said 31 assault weapons were also recovered from the suspects.

Mba said, “A total of 60 male suspects all implicated in several cases of conspiracy, armed robbery, kidnapping, and homicide-related offences are being paraded.

“Within this period under review, a total of 31 weapons of the assorted mix were recovered; 10 of these weapons are AK47 rifles while nine are AK47 rifles.

“We also recovered other kinds of weapons including pistols, locally fabricated weapons, amongst others.”

He disclosed that among the recovered weapons was a unique gun brought in from Libya.

Mba, while restating the commitment to security and safety of lives of citizens by the police, revealed that kidnappers and armed robbers now move weapons from one place to another by hiding them under the seats of motorcycles.

He also stated that most of the kidnappers used charms in the belief that they could escape arrest.

The spokesman said the Force had deployed some hi-tech equipment and spy vehicles on highways across the country as part of measures to curb crime.

Video of the gunrunners being questioned below: