The spokesman of the Anambra State Command of the Nigeria Security and Civil Defence Corps, Asc Okadigbo Edwin, confirmed the incident. 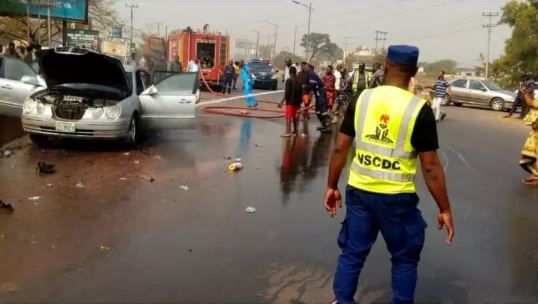 There was panic in Awka on Wednesday morning as a Mercedes Benz suddenly went up in flames in front of the Anambra State Government House.

DAILY POST gathered that the sudden fire incident threw workers in the government house and members of security agencies into panic as they battled to put it off.

A source told a correspondent that the panic was made high by the fact that the state governor, Chief Willie Obiano had just driven past the gate of the government house, into his office as he resumes work for the day, when the car suddenly went up in flame.

The spokesman of the Anambra State Command of the Nigeria Security and Civil Defence Corps, Asc Okadigbo Edwin, confirmed the incident, but described it as a minor incident.

He said, “On the 22nd of Jan 2020 at about 10.26hours, a Mercedes with registration number EPE 952 FM caught fire in front of Anambra state Government House Awka.

“The cause of the incident is yet to be ascertained as investigation is ongoing but could be linked to leakage of fuel.

“Anambra State Fire service responded immediately and the fire was immediately brought under control, while NSCDC Rescue team led by SC Ochei Paul assisted in rescuing the driver of the vehicle and in controlling traffic to allow free flow of traffic.”