A young man based in Port Harcourt, Rivers State has recounted how two ladies accused of lesbianism were almost lynched by an angry mob. 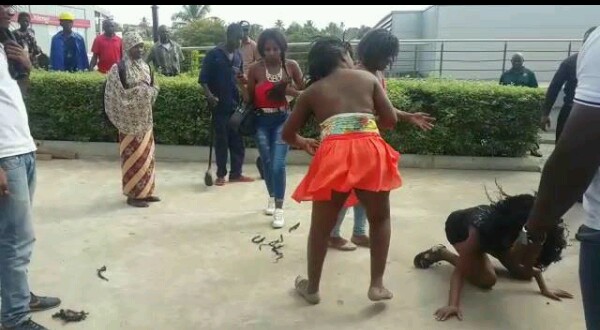 Two ladies based in the Niger Delta part of Nigeria were almost lynched by an angry mob after being reportedly caught sleeping with each other.

An angry mob who caught them in the act stripped them naked and flogged them profusely. They later found a way to escape as they were given the hottest chase of their lives. Fortunately for them, they ran into a social media user who goes by the monicker 'Ex Militant' who was able to appease the angry mob and take the persecuted ladies for some medical treatment.

The Good Samaritan went further to question the same-sex laws in Nigeria which attracts a 14-year jail term for offenders and another 7 years for an accomplice.

"As I was stepping out of my compound to get bread for breakfast this morning, I saw two girls, stark naked running towards me. Behind them were a group of young men and women with sticks, stones and machetes hotly pursuing these girls.

The force with which these girls grabbed me begging me to save them eh, where it not for the gate i would have somersaulted and crashed on the ground. The crowd on seeing me mellowed, and started chorusing 'oga those girls na lesbians'. I tactfully dismissed the mob and promised to handle the issue.

I am with them in a pharmacy getting their wounds treated. There is a nagging question I want answers to as I watch these beautiful harmless girls:

Why are Africans vehemently opposed towards these kind of people and LGBTQ people in general? Is religion or culture the reason? What is wrong in loving a person of the same sex? Is it the greatest of evil? Is evil categorized? I need answers to these questions in order to know what decision to make on these girls..."