A Nigerian actress, Calista Okoronkwo has talked about how she once rejected a marriage proposal. 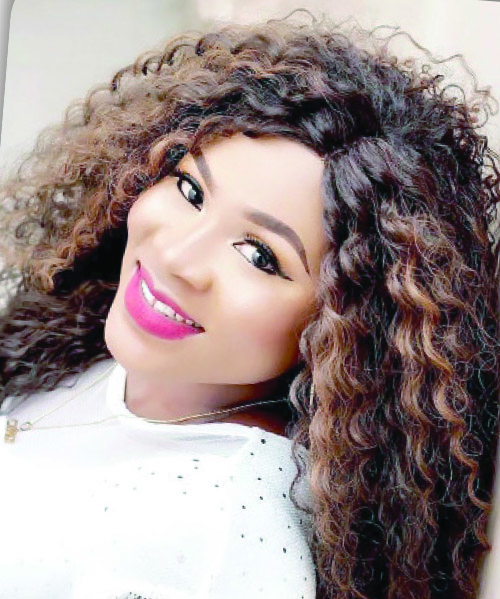 Gifted thespian, Calista Okoronkwo couldn’t hold back the urge to act, as she discovered her talent at a young age.

Determined to excel against all odds, Okoronkwo fought hard to become what she is today. Now, she is counting her blessings for being a celebrity.

In this exclusive interview, the Imo State-born actress, who has featured in many movies including Celebrity Marriage, Clinic Matters, Career Woman, College Girls just to mention a few, talks about her journey to stardom.

How did you get into acting and what was your first gig?

Growing up, my family used to watch lots of home videos. I would go to school and whenever we go on break, I would do the ‘regurgitation’ process of acting out every scene and saying the lines said in the movies to the amazement of my classmates. I knew I loved to act. After my JAMB exams, I was waiting for the result and I decided to get busy, but I didn’t know how. On that fateful day, I got the phone number of a movie director from one of the movies we watched, and I took a bold step to call him. I called him, he picked up and I told him I would like to act. He invited me over to the location and I was so thrilled to see what film production was all about. This is not me watching a home video, this is me making one! My eyes lit up in excitement. That movie was my first and it was titled, Too Late To Claim.

What were your initial challenges as an up and coming actress?

I went for this audition and I got selected and was given a script. I stayed rehearsing it day and night, only to rent a movie from the rental shop and discovered that I was watching the same movie I have been rehearsing the script for weeks. It’s either they gave the role to someone else and shot the movie without me or they gave me a script for a movie that was already shot, just so it didn’t look like I wasted my time.

What project would you consider your most challenging and why?

I would consider my character as Nurse Titi in Clinic Matters the most challenging. This is because I joined the show replacing the first Nurse Titi, and for me, it wasn’t easy trying to carry on with the way she had made the character to be. I was not sure the viewers would like me but I did my best, interpreted the role my way and it all ended in praises. The director/executive producer of the TV show, Paul Igwe, also helped me throughout that transition. He did his best to bring out the Nurse Titi he wanted me to be. The show gave me my alias, Nurse Titi. Most people don’t even know my real name. Nurse Titi is what they call me when they see me.

Tell us what you like about the character you played in your most challenging movie.

I totally enjoy taking long lines with big medical terms while filming the TV series. It was not just filming a series with Clinic Matters; it was also a learning process for me. Nurse Titi as a character in the series is a lady who stands her ground. She doesn’t like to be bullied at all and she has a mind of her own. That’s a whole reflection of who I am in reality, and that’s why it wasn’t so difficult being Nurse Titi as soon as I understood the character and got comfortable with it.

In recent times, I have had my own fair share of betrayal from some people who have cut my friendship, and some people I hold dear and I am not going to let that happen to me again. Right now, I am guarding my heart jealously; I am guarding that friendship zone jealously. I do not keep lots of friends. I want to have my own family someday. I would like to build my own family someday. I would like to describe myself as someone who is passion-driven as well. That’s who I am, that’s what I represent. And lest I forget, I am a very cheerful person. The first thing you notice about me is my smile, even during my worst time. That’s why people don’t know when I am going through this or that. I always wear a smile and my smile is infectious. The girl with the infectious laughter, people like to say that about me.

What sexy part of you got you your first movie role?

I smile a lot and my smile is the first thing you notice when you meet me, and it’s quite infectious. When I started acting, I used to have very good hips. Right now, I have been working out and I have really lost my hips. I used to have this really great hips, I don’t have it any more. I think that’s it.

Marriages in Nollywood keep breaking up; what is your take on that?

The truth of the matter is, everyone thinks people in Nollywood get breakup, but it’s just because everyone knows these people and because they are popular, anything that concerns them concerns everyone else because they are out there in the media, in the open. If someone in the movies does something and another person on my street does the same thing, nobody will care about the person who has done that same thing on my street. Rather, they will be interested in that person in the movies that has done the same thing because everybody wants to read about them.

Marriages break up everyday not just in Nollywood, that’s why I am taking my time, and I am hoping and praying to God that when I finally find the one and I say I do, that person by the grace of God would be who I will grow old with. Let me use my mom and dad as examples, when my dad was alive, both him and my mum were like (Siamese) twins. That’s the model I want for my own marriage. Divorce is not even an option for me, that’s the agreement I have with God and I hope it never happens to me. If someone is married to a person who abuses him or her, I think it’s better that they walk away. That’s the only time I can approve divorce – domestic violence.

Is marriage far or near for you?

Have you said no to a marriage proposal before?

Are there actors you look up to?

If you are to date any actor in the industry, who would that be?

That’s weird, you know why? I have never really looked at any actor in that manner. When it comes to films, I always draw strength from the actor I play alongside with, and I don’t look at them like that because I am this kind of person that does not mix work with pleasure, I dread it a lot. I like work to be work and pleasure to be pleasure. So, for me, I have never really dated anybody in my professional zone, I like it to be formal and professional as it can be. Really, I can’t really think of anybody. There are many good-looking guys with good behaviour, but I have never!

No, I am not in a relationship.

What’s the quality trait you desire from a man?

How do you handle sexual pressure?

I cover myself with the blood of Jesus!