Seven traffic offenders have been arrested after they forced a motorist to park for not moving fast and was forced to drive to their hideout where he was extorted. 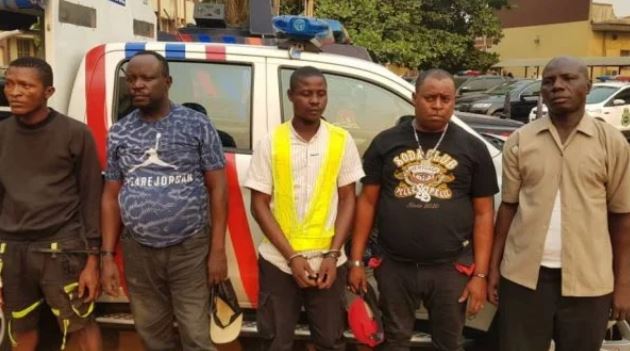 The operatives of the Rapid Response Squad (RRS) have arrested seven fake traffic officers who had reportedly arrested a motorist for not speeding to their satisfaction.

The men before their arrest along the in LASU – Igando Expressway were posing as Local Government Traffic officers.

The suspects, who claimed they were on contract with the Ikotun-Igando Local Council Development Area in Alimosho Local Government, were arrested yesterday afternoon after receiving complaint from a victim.

The suspect had last week Thursday extorted N41,000:00 from the victim for not speeding on the Expressway.

The victim, according to investigations, was heading towards Igando from LASU when the suspects, operating on Keke NAPEP forced him to park for not speeding. He was thereafter forced to drive to their hideout on LASU – Igando Expressway.

It was here, his vehicle was impounded and made to pay N41,000 before the vehicle was released to him the following day.

During the arrest, over 15 private vehicles and two commercial buses had been impounded by the miscreants and their tyres deflated.

Some of the victims, who the gang just arrested described the activities of the suspects as illegal. One of them who declined to mention his name stated that the suspects demanded N30,000 from him for his vehicle not to be towed to Badagry, where he would be made to pay N75,000.

Investigations revealed that many private car owners were paying cash and through a POS allegedly owned by one of the suspects.

According to Taiwo Falodun, a dismissed Spy Policeman, there are three teams operating for Ikotun-Igando LCDA, adding that, they were engaged to work for the Local Government Council on contract.

He noted that the team remits N20,000 weekly to the Local Council.

Recovered from the team were payment tickets issued to their victims ranging from N25,000 to N75,000 and one tri cycle