It was reported that Giroud has already agreed to a contract with Inter Milan which runs until the summer of 2022 before leaving the Blues. 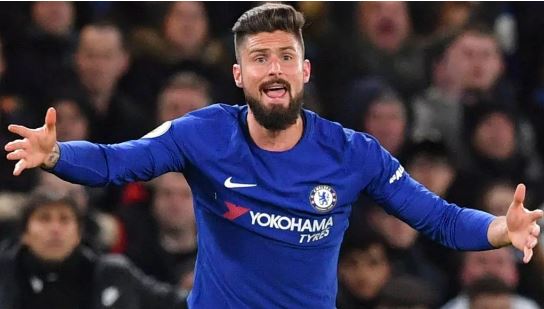 According to Sky Italia’s Gianluca Di Marzio, Giroud has reportedly been offered an 18-month deal by Spurs after Mourinho’s side discussed with the player’s representatives as they attempt a late deal for France World Cup winner.

Tottenham will now have to battle with Inter Milan over Giroud’s signature.

It was reported that Giroud has already agreed to a contract with Inter Milan which runs until the summer of 2022 before leaving the Blues.

Inter and Chelsea are yet to agree on a transfer fee for Giroud.

Antonio Conte’s side are willing to offer £3.4million but the Premier League giants are demanding £8.4million.

Giroud’s current contract at Stamford Bridge expires at the end of the season.

The former Arsenal star only appeared in seven matches across all competitions for Chelsea this season.

The 33-year-old finds himself behind Tammy Abraham and Michy Batshuayi in manager, Frank Lampard’s pecking order.

Speaking on Giroud’s future, Lampard recently told reporters at Cobham Training Centre: “With Oli the situation is if it’s right for everybody, first and foremost for us as a club because he’s under contract, then we’ll look at whether he can leave the club.

“He’s been a great professional here, trained brilliantly, so I hold him in a lot of high regard for that. ‘But nothing is done yet.”