She may have been sentenced to death by the court but Maryam Sanda has some legal options to save her head. 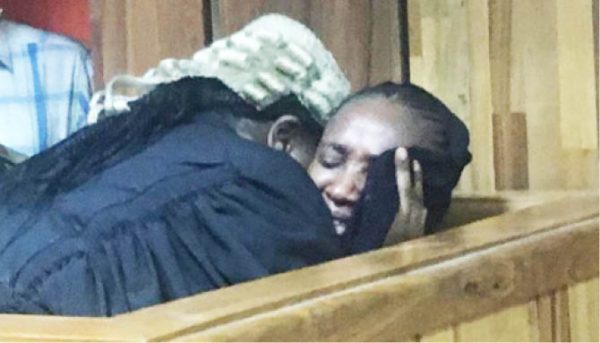 Maryam Sanda being consoled by a lawyer, shortly after Justice Yusuf Halilu of the FCT High Court sentenced her to death by hanging in Abuja on Monday.

According to a Daily Trust report, an FCT High Court in Maitama has sentenced Maryam Sanda to death by hanging for killing her husband, but the road to freedom may not be closed to her.

After sentencing her to death on Monday, the trial judge, Justice Yusuf Halilu, ordered that she be remanded at Suleja Custodial Centre pending when her right to appeal has been exhausted.

Legally, she has the right to appeal the judgement against her at the Court of Appeal, lawyers said.

And if not satisfied with the decision of the appellate court, she can still go to the Supreme Court to ask that the judgment to be upturned.

A Kaduna-based lawyer, Mohammed Sani, told Daily Trust that the only option available to Sanda is to file an appeal, “which is her right”.

Asked how long he thinks it could take for the appeal to be determined, Sani said criminal matters are being tried expeditiously unlike civil cases that take long time.

“Once all documents have been filed, they (appellate court) expeditiously look at them,” he said, adding that it is the same way even at the Supreme Court.

On whether the convict could apply for post-conviction bail, Sani said since it is a murder trial, it might not be applicable and, as such, she would remain incarcerated while exercising her rights to appeal.

According to Abuja based lawyer, E.M.D. Umukoro Esq, Sanda is now a convict but still has an option of appeal.

“The essence of the appeal is to challenge the decision of the court but any challenge at this stage must be thorough. It is not mere trial. It is serious business,” he said.

He added that “usually most defendants do not see the gravity of the charges hanging on their neck until judgEment is handed down. Criminal trials are serious business and is like a medical doctor operating on a patient: it could mean life or death. Therefore, her family must get sound, tactical and experienced lawyer”

Another lawyer, Barrister Ololade Akinkuotu, said the law allows Sanda to seek bail pending the hearing of the appeal.

She said, “It has been decided in a plethora of cases that such bail is not granted as of right. They only lie on the applicant’s ability to show peculiar, special facts and circumstances. The granting of bail pending an appeal is, therefore, at the discretion of the court depending on the special facts, circumstances and severity of the offence.”

The Abuja-based lawyer cited the case of Abacha v State where she said it was held that: “It is well accepted that whatever the stage at which bail is sought by an accused person, ill-health of the accused is weighty enough to be reckoned with as a special circumstance.”

“In the case of Ani v State (2001) FWLR (Pt.81) 1715, Obadina J.C.A, it was held thus: “I do not think the respondent has sufficiently discharged the burden of showing cause why bail should not be granted to the Appellant. Indeed, I am of the view that the Appellant has not only placed some materials before the learned trial judge but has shown by his affidavit in support, exceptional circumstances why he should be admitted to bail. As it is only the living that can praise God, so it is only the living that can be tried, convicted and punished for an offence no matter how heinous the offence maybe.”

On the rights to appeal, Barrister Akinkuotu said the convict has 90 days to file the appeal. She, however, added that she could apply for a leave for an appeal if the appeal documents were not filed before the 90 days elapses.

Another road to freedom for the convict is if she is considered for pardon by the President. Lawyers, however, said this could only come after she has served a reasonable jail term.