Amidst breakup rumours, Davido and his fiancee, Chioma were spotted at a club dancing and having fun. 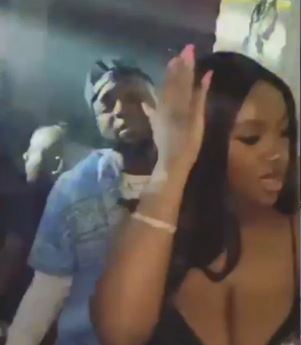 Despite break-up rumours, Davido and his fiancee, Chioma have been spotted together at a club where she is seen giving him a lap dance.

It will take more than just rumours to break the beautiful couple, Davido and Chioma as they are seen loving up at a club together.

Chioma who delivered a baby boy on Saturday, October 19, 2019, looked as beautiful as ever while showing off her cleavage in a low cut top while she rocked her baby daddy, giving him a lap dance.

Recall that there have been rumours that the couple are having troubles in their relationship after an allegation that Chioma was sleeping with Peruzzi before he was passed on to the OBO boss.

Watch the video of the two having a good time at the club below.