Sisters Discover Spot Where People's Destinies Are Locked In London


A place in London was spotted where peoples destinies are locked in a padlock with their names on it. 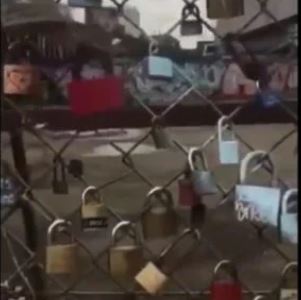 Two sisters have allegedly spotted a spot in London where people's destinies were locked in a padlock and hung on an iron-mesh fence.

The sisters who were walking along Shoreditch,London came across the strange padlock with people's name on them.

The locks are spotted with codings and names of people on them.

In the video, they could be heard quoting Bible scriptures and praying earnestly for the release of the destinies of the victims.

Some sisters reportedly discovered this place in Shoredich, London where people’s destinies have been padlocked with names on their names on the locks. pic.twitter.com/cWAyWJLgov