The police in Abia state has issued a warning saying that the burial of Nnamdi Kanu's parents will not hold if a certain set of people attends. 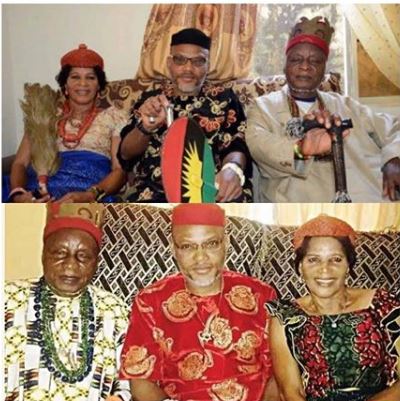 Nnamdi Kanu and his parents
The Abia State Police Command has warned members of the Indigenous People of Biafra not to show up at the burial of the parents of their leader, Nnamdi Kanu.
According to Punch, the warning was given by the Commissioner of Police, Mr Ene Okon, who said the police would not allow IPOB to participate in the burial.
He added that if members of the proscribed organisation were seen anywhere around the burial venue, the police would scatter the burial.
IPOB had earlier asked the Nigerian army and other security agencies to better face the real security challenges confronting the country, instead of stopping them from burying His Royal Majesty Eze Israel Okwu Kanu and his wife.
The pro-Biafran said its members were not coming for war but to pay their last respects to the parents of their leader.
But the CP said he had reached out to the traditional prime minister of Afaraukwu, Kanu’s hometown, to make it clear that the burial would not hold if IPOB members attended.
He said, “Whoever thinks along that line is fooling himself. IPOB will dance during the burial and the police elephants will dance too.
“They (Afaraukwu community) should tell IPOB not go near the area, let alone participating in the burial.
“If the community fails to adhere to the police’s warning the burial will not go on smoothly because we are going to scatter the place. IPOB is proscribed by the Federal Government.”
Okon added that no one should expect him, as the Commissioner of Police, to sit and allow a proscribed group operate in the state.
“We will not tolerate any flag, IPOB insignia or the group’s member disguising as Jewish or Zionist Church members during the burial.”
He insisted that the police would only provide security for the burial on the condition that no member of IPOB would be seen around the venue.
Top Stories