The publicity secretary of the APC in Ebonyi State, Nwoba Chika has been attacked by Nigerians online for calling the chairwoman a prostitute for tinting her hair. 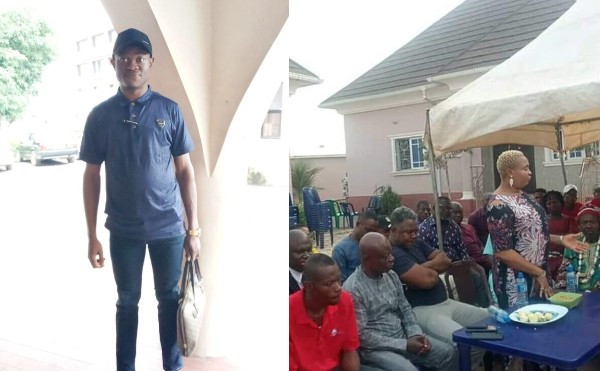 The publicity secretary of the All Progressives Congress (APC) in Ebonyi State, Nwoba Chika Nwoba ignited the wrath of social media users after describing the chairwoman of Ezza North Local Government Area as a "prostitute" for tinting her hair.

Nwoba who wondered if the local government chairwoman can produce marriageable daughters by going blonde, stated that her look is what happens when a woman is brought into power as a result of compensation for immoral services to a highly placed politician.

Look at the head of this woman standing and talking in the pix below. She's the current chairman of Ezza North L.G.A of Ebonyi State and re-contesting. Her husband is not dead. He's robustly alive. She's a medical doctor. And she's not a liquor joint operator.

It was immediately partial financial autonomy for local government was granted that she turned her hairstyle to the kind of prostitutes. Her hairstyle used to be different from this. And what moral lesson is she trying to pass across to young female children by this? What's she teaching her own daughters?

Aren't leaders supposed to be agents of the teaching of virtues of morality, at least, through their physical carriage?

This is what happens when a woman is brought into power as a result of compensation for immoral services to a highly placed politician. The man folding his hands is Hon. Victor Chukwu, Leader of the Ebonyi State House of Assembly. He was shocked but couldn't challenge her.

Can this one produce marriageable daughters? 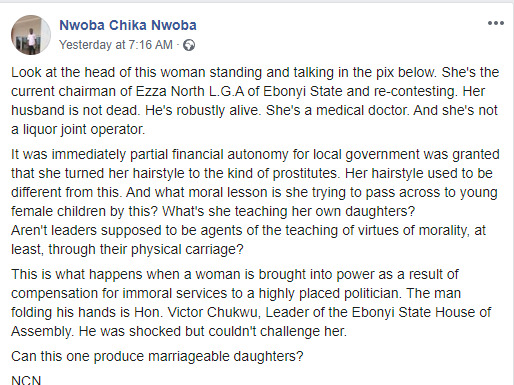 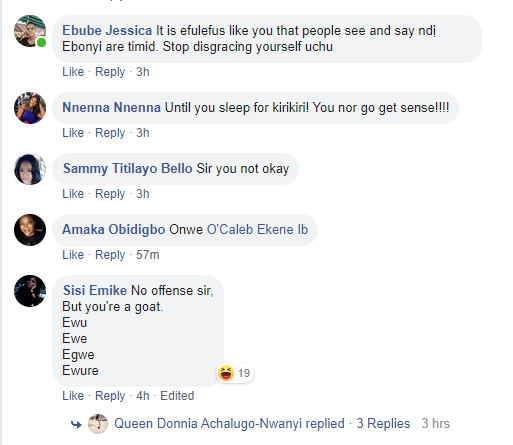 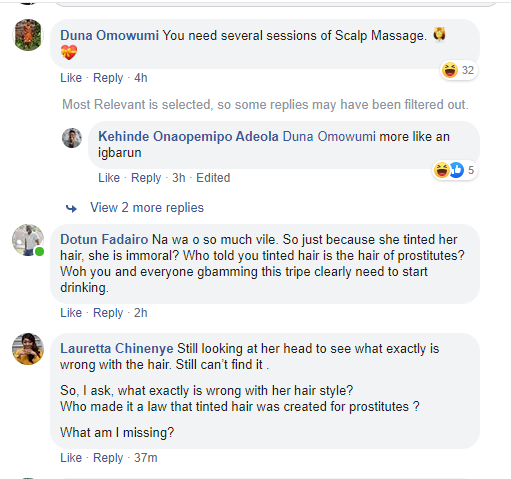 My post on Facebook about a council chairperson intentionally wearing a stenchy outlook has been trending offline and online. Some self-styled nocturnal feminists have taken to their profile accounts to pour invectives on my character.

Two sisters have taken to their walls calling me names. They want me to publicise them but I won't. Though they have helped to curry new followers to me which I have received in hundredths.

Imagine girls who have gone to anywhere or have anything of their own apart from proceeds from whoredom calling me disadvantage to Ebonyi State.

I never called the chairperson a prostitute. I only alluded her appearance to that. I didn't condemn her appearing on low cut. I only condemned her painting the head which made her characteristic of a wayward public servant. If she's an ordinary person, I wouldn't have bothered myself. It's like a male council chairman appearing on earrings. I am bothered about the moral implications of her vile outlook.

I studied our politicians well. They value public criticism so much. If one wants to effect change in ways things are done leadership wise, discreet criticism will not effect the change. I have tried it several times and it failed. I was not criticising her leadership. If I want to do so, I know how best to go about it.

So many people who have been waiting for a veritable opportunity to show how much they hate my existence have taken to their walls to cast putrid utterances on me. But they failed it. They are attacking the wrong person. They are only forcing me to visit the archives of the said council chairperson. The invectives are not penetrating into me at all. I am used to such things including battery.

However, I am thankful to God for the grace to raise issues that always permeate nooks and crannies and, create hallowed concerns. It's not easy. It can only be God. I also plead with the Urums to let me be. They are fighting the wrong person. They might not know now. I never wrote about them and can't condescend as low as writing on hotel room characters.

They should not attempt to practise feminism using me a litmus test. Nobody will hear it now until I decide to embrace fire.

I never called Nora a prostitute. Students of pragmatics may know better, not lawyers who have not won the most molecular of cheap cases and not working to do so. I never condemned her going on low cut. A council chairperson wearing anklets, chewing chew gum while addressing elders and appearing despicable is not teaching growing girl children virtues of morality and good conduct.