A man called the 'world's most talented man' has been caught on camera drawing with sand in minutes. 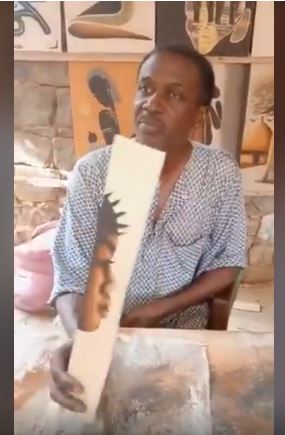 A video has emerged online showing a middle-aged artist whose name has not been identified, creating a beautiful work of art.

In the video, the man stirred social media with an amazing artwork which he produced in less than 40 seconds using raw sand.

The video which has gone vira on social media describes the man as the world's most talented.

Although the claim may be questionable as there have not been any official means of ascertaining it, the man's talent as displayed in the video makes it clear that he could surely be considered for such a title.


The talented artist was captured from beginning to end as he created the beautiful artwork in less than one minute.

At the start, the genius was seen applying what appeared like a form of glue on the wooden slate in a particular pattern. This appeared as the foundation which was crucial to getting the exact shape of the art.

Next, the middle-aged man who looks to come from an average locality applied different shades of raw sand on the glue. He started with the darkest shade of the sand which was black proceeded with lighter shades of it.

Before one would say Jack, the man raised up the slate, hit his hand against it and alas, there was a breathtaking artwork of a beautiful African woman.