Two people have been severely injured after a car rammed into the head office of the FRSC in Onitsha. 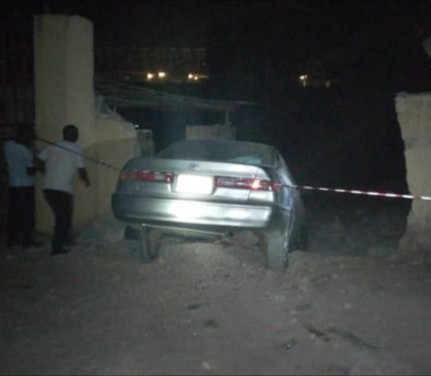 The lone accident, involving an ash-coloured Toyota Camry with registration number KWC818SC, occured at about 6:40pm on Sunday, March 1, 2020.

The driver reportedly rammed into the gate of the FRSC Command following loss of control.

The victims, who were occupants of the car, refused to be taken to the hospital, according to The Nation

Confirming the incident, the Sector Public Education Officer, Federal Road Safety Corps (FRSC), Pascal Anigbo attributed the cause to loss of control, as a result of over-speeding.

“FRSC operatives on ground reported that the injured victims refused to be taken to the hospital.

“The scene has been cordoned off as we await the arrival of the Nigeria Police Force, who were contacted immediately the crash occurred.

“Drivers should obey speed limits and drive with common sense speed, especially in built up areas.”