The leader of a South Korean cult accused of spreading coronavirus in the country went on his knees to beg for forgiveness after officials called for him to be investigated for murder. 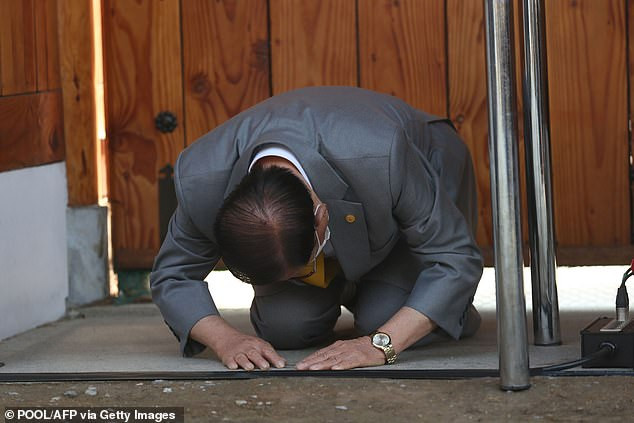 The leader of the South Korean 'cult' accused of spreading coronavirus in South Korea, today begged for forgiveness after authorities launched a bid to charge him with murder.

Self-proclaimed messiah Lee Man-hee offered his 'sincere apology' and admitted that 'many people have been infected' after an outbreak at his Shincheonji cult.

During a press conference on Monday, the 88-year-old got down on his knees and bowed down before reporters in Gapyeong with his head to the floor, as he pleaded for the 'forgiveness of the government.' 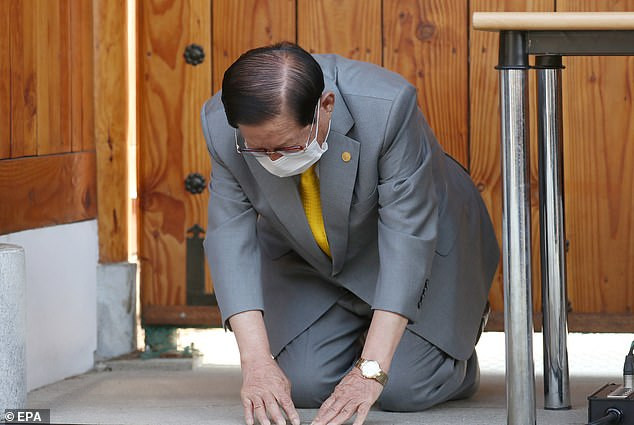 "I would like to offer my sincere apology to the people on behalf of the members,' Lee said today, his voice breaking.

'Although it was not intentional, many people have been infected,' he said.

Lee insisted that the group was 'actively cooperating with the government'.

'We will do our best and not spare human and material support,' he added, pausing occasionally to wipe tears from his eyes as protesters shouted abuse.

The secretive church is linked to more than half of South Korea's 4,000 coronavirus cases  after failing to co-operate with authorities over the outbreak, prompting the government to press for charges.

The numbers are also expected to rise further as 260,000 people associated with Shincheonji are being tested for the virus. 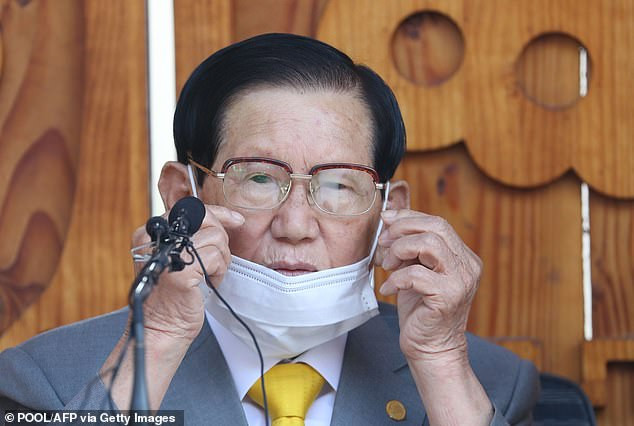 According to Mail Online, the outbreak is believed to have begun after a 61-year-old woman developed a fever on February 10 but attended at least four church services in Daegu before being diagnosed.

Shincheonji's director of international missions Kim Shin-chang also told reporters that many members have not responded to health officials as more than 1,000 people associated with the church are yet to answer survey calls.

'It is possible that our members are not completely forthcoming with the authorities on their movements out of fear their Shincheonji affiliation could be exposed,' he said.

'Social hatred and discrimination against our members is so pervasive that many fear losing their jobs or fuelling conflict among family members if their faith is revealed.'

'We have urged our members to tell the authorities everything,' said Kim but he added that doing so was a 'personal decision'.

Seoul's city government has asked prosecutors to press charges, including murder, against Lee and 11 other sect leaders for failing to co-operate.

This comes after South Korea's Centres for Disease Control and Prevention reported 476 new cases of the coronavirus on Monday, raising the total to 4,212 with 22 deaths.